Earlier this month, Daily RFT reported on MX Movies (618 Washington Avenue), a new downtown movie theater equipped to destroy your new year's resolutions. On January 17, the dine-in movie experience welcomed Gut Check down for its not-so-soft opening, packing the stadium seating in all three of its theaters completely to the brim. And boy, are those seats cushy.

MX Movies, the latest location added to the STL Cinemas roster along with other non-traditional offerings such as the Moolah Theatre (did someone say couches?), occupies a second-floor space in the downtown Mercantile Exchange building. Most notably, it features dishes designed by aptly dubbed "chef de cinema" Josh Galliano, the former executive chef of An American Place and Monarch (and now, as reported by Gut Check, the Libertine).

"There hasn't been a movie theater in downtown St. Louis for about ten years or so," says beverage director and assistant general manager Evan Jones (also a Gut Check contributor). "Downtown has been changing a lot in recent years. This is great step forward for its revitalization." 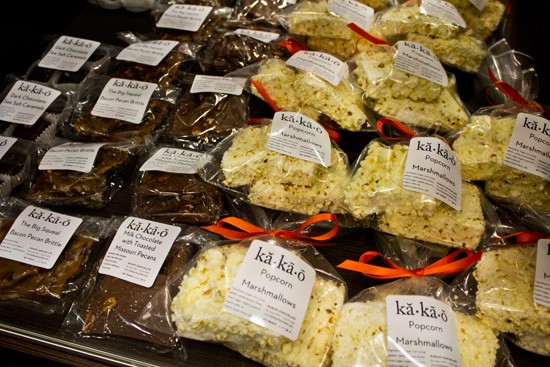 Patrons can grab snacks such as premium Parmesan and black pepper popcorn and Pint Size Bakery oatmeal cream pies from the concession stand, or can instantly tell a robot to fetch refreshments and food by barely lifting a finger -- literally, that's all you have to do.

Simply select the desired menu item such as a Salume Beddu salami sandwich ($8) or sweet potato poutine ($7) via a tablet (there's one hiding under every two seats) and have hot food delivered straight to the small swivel table installed on your plush easy chair. That's right, folks. Somebody find Marty McFly -- we have officially arrived to the future. Yikes. 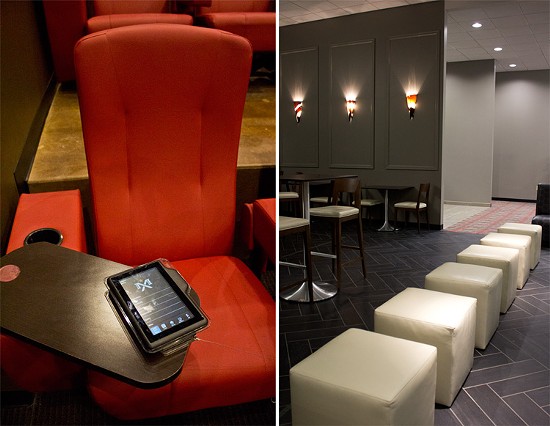 "We're offering a complete experience. There aren't many places you can go and have a nice scallop dish while watching a movie," Jones says.

MX Movies tickets cost $12 for adults, $10 for students and seniors and $8 for matinees and children under 12. If you're looking for the theatre right now, you'll have to put in some effort. A thirty-foot sign is in the works, but for now, it still feels like a well-kept secret. Pro tip: figure out parking and showtimes ahead of time.