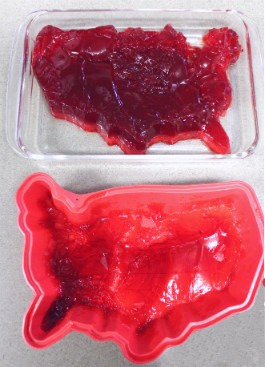 Earlier this week Gut Check talked to Salute American Vodka founder Pete Kelly about the product's launch in Missouri. Eager to concoct ways to taste test Salute American Vodka, we threw around a few ideas, until one stuck: red, white and blue Jell-O shots! For awhile, Jell-O o'clock was our favorite time of day at Gut Check International Headquarters, but recently the tradition has fallen off. This also presented the opportunity to use another locally made product with a Gut Check past, the Jellinator.

But then the idea got even grander. What if, instead of making red, white and blue Jell-O shots, we took up a larger torch, worthy of Lady Liberty herself? And thus a giant Jell-O shot shaped like the lower 48 was born.

In Jell-O we trusted, however misguided that might have been. 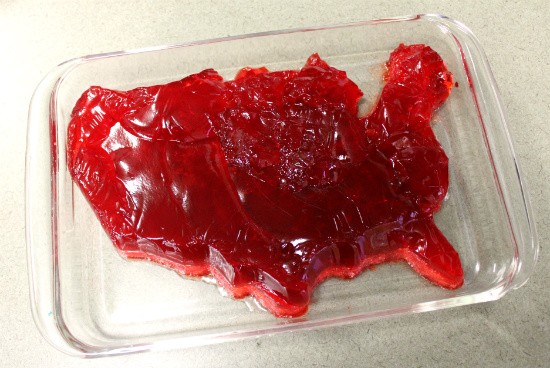 To make this massive map of boozy Jell-O we doubled our regular Jell-O shot recipe that calls for 1/2 cup vodka, 1/2 cup triple sec, 1 cup boiling water and one packet Jell-O, all combined in the Jellinator -- which, thanks to its handy magic tip, prevented splashing into a rather large America-sized Jell-O mold.

We waited in anticipation for several hours, but the Jell-O wasn't appearing to jell. We punched our time cards and let it set overnight. In the morning, it was little more gelatinous than the day before. In hindsight, our major mistake was likely in doubling the alcohol proportions, as such a pool of booze just won't solidify. To speed up the process we slipped the 48 states into the freezer, which was sort of a solution. Within a few hours we were able to exhume Jell-O America from the mold, though some of the Northwest states (and most of Florida), um, succeeded on us, sticking firmly to the interior of the mold.

The end result wasn't as elegant or sleek a design as we imagined, hoped or, dare we say labored, to create, but it did taste damn good. Especially around the frosty edges, which took on more of a sno-cone texture. And while it wasn't the perfectly executed success we dreamed of, like the Founding Fathers' great American experiment, we can't be faulted for pursuing an ambitious dream. We're pioneers, goddammit. Creating history, one Jell-O shot at a time.