Former A-B Prez to Open Jamba Juice Stores, Which Do Not Serve Beer 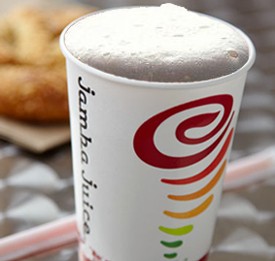 Foodies hoping for a little bit of California flair in St. Louis cuisine may finally get their wish.

(We think he's nuts, but whatevs.)

Jamba Juice first opened in California 23 years ago and now has more than 700 domestic and 33 international stores according to the franchise website, as well as a line of frozen smoothie mixes available at grocery stores. Devotees looking to get their smoothie on in St. Louis can find Jamba mixes in the frozen-foods section at Dierbergs and Target.

There are no stores in Missouri or Kansas (the closest Jamba to our fair city appears to be located in Springfield, Illinois), but Peacock told the St. Louis Post-Dispatch he hopes to open his first franchise here this summer. The company also hopes to expand the JambaGo concept, which will bring smoothie dispensers and juices to grocery stores and gas sations. (Think Icee machines, only in blindingly bright colors.)

The menu at Jamba Juice was recently expanded to combat a few unprofitable years. Some franchises now offer "healthy" wraps and sandwiches in addition to smoothies, juices and "healthy" baked goods. Just, um, don't read the nutrition info Jamba makes readily available at the stores and online if you want to continue to believe that peanut butter smoothies and Asiago soft pretzels are good for you. Tasty, yes. Healthy, debatable.

Please join Gut Check in directing a slow clap Mr. Peacock's way, for abandoning the beer biz to jump aboard an industry that hit its stride in 1996. Now, if he were to somehow combine smoothies and beer, we'd stand in line to invest.