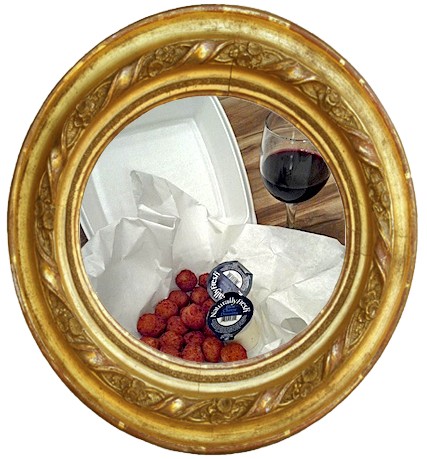 (He once famously summed up that "Provel is a processed cheese made from Swiss, provolone and cheddar cheeses. Sounds harmless, no? Sadly, it is considerably less than the sum of its parts.")

Gut Check, however, prides ourself on our open-mindedness -- or, shall we say, our open-palatedness. And that's what found us in line at our neighborhood Imo's late last week, itchin' for a sample of the pizzeria's new "Provel Bites."

Imo's introduced these wee fried cheese balls around New Year's, and judging from the response on the pizzeria's Facebook page, fans of the Square Beyond Compare are fired up and ready to go. Hearty hunks of processed cheese breaded and deep fried until oozing molten grease: What's not to love?

Though Imo's ad appears to promise marinara, Gut Check was asked to pick ranch or blue cheese dressing in which to dip our 99-cent order of a dozen Provel Bites.

We went with blue cheese, reasoning that when given a choice, one should always dip one's balls of cheese into a sauce of cheese. Your cheese, your call, though. (And your arteries'.)

As noted above, when paired with a pizza, an order of Provel Bites costs 99 cents. This is an "Introductory Offer," however, and moreover, if you order the bites on their own, they'll set you back more than $6.

Dunno if we'd fork over six bucks for a pizza parlor appetizer, but for 99 cents we've got no complaints. We suggest pairing your personal Provel party with a bottle of 2011 Leese-Fitch pinot noir ("on sale" for $8.99 at Schnucks!).