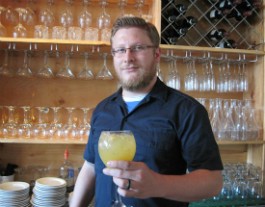 Todd Brutcher isn't afraid to experiment with drink recipes, mixing and musing to see what sticks. As a bartender and manager at the Princeton Heights eatery Onesto Pizza & Trattoria (5401 Finkman Street; 314-802-8883) Brutcher whips up wildly creative, seasonally inspired cocktails and pitchers of sangria each day. And now he has an event to showcase his talent for daily drink invention in "Stump the Bartender," a new, ongoing event at Onesto that challenges guests to bring three edibles for Brutcher to concoct a cocktail with. If he fails to impress, guests get a pitcher of Onesto's house sangria, well, on the house.

This month's challenge occurs tomorrow, Tuesday, January 15, from 5:30 p.m. to 7:30 p.m. at Onesto. Gut Check caught up with Brutcher to learn more about "Stump the Bartender" -- and the craziest ingredients at its first night this past November.

Brutcher says the event rules are simple: Guests should bring any three edible ingredients, and he has 30 minutes to develop a drink using as little or as much of each as needed. It's free of charge and open to the public, and the only request he makes is to stick to the honor system about whether or not you like the results.

"You can't bring in a bottle of Windex and a shoelace, but something fun and crazy, and I've got half an hour to make a tasty cocktail out of your three ingredients," Brutcher says.

Onesto hosted the first "Stump the Bartender" event in November, with a strong first sampling of bizarre, interesting ingredients from guests. Brutcher says the first challengers presented him with durian fruit, Vegemite and aloe vera.

"One guy last month brought a durian fruit -- the taste isn't as bad as the smell, but I think a customer described it as smelling like a severed human foot. God knows how he knows what that smells like -- I used maybe two shots of that blended with a liquid," Brutcher says. "I blended them all together with my take on a fun bloody mary mix with tomatoes, squash, zucchini and bell peppers doused with a little bit of olive oil. I mixed that with a little bit of vodka and his ingredients; the guy took one sip, looked at his wife and said, 'Damn.'"

Brutcher got the idea for the event while on vacation with his wife in Hawaii in August. He and his wife were chatting with a fellow tourist over lunch when small talk turned to work. Brutcher mentioned his job at Onesto and the man described an event held at a restaurant in his hometown called "Stump the Bartender."

"He told me about it, and I said, 'Well, I'm totally stealing that and I'm bringing it back to St. Louis,' he says. "I pitched it to our owner and general manager, and they thought it would be a fun time, too."

Moving forward Brutcher says he'd like to host "Stump the Bartender" once a month at Onesto.

"I had a great time, he says. "It's fun, and it's something I think will build over time into a pretty good event."