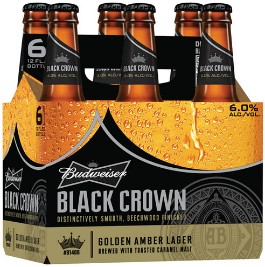 This month, "The King of Beers" gets a new crown.

Anheuser-Busch InBev announced this week that it's releasing a new beer, Budweiser Black Crown, available first in St. Louis on Monday, January 21. The brew will hit shelves nationally following its inaugural commercial airing during the Super Bowl on Sunday, February 3.

Gut Check is always happy to try new beer. But what does it taste like?

A-B describes Budweiser Black Crown as a golden amber lager with a bit more body than other Budweiser products, "...a blend of two-row caramel malt and four types of domestic hops...finished on a bed of Beechwood chips for a smooth, balanced taste," according to a press release circulated yesterday.

Also notable is the brew's 6 percent alcohol content, a skosh higher than regular Budweiser. It'll be available in twelve-ounce glass bottles in six- and twelve-packs, as well as 22-ounce single bottles.

Gut Check will follow up with more after an official test-kitchen tasting.

Beer This Just In