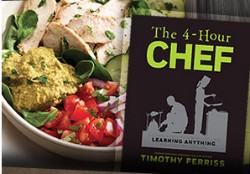 In November Gut Check learned that Panera Bread, the nationwide brand of locally owned and operated St. Louis Bread Company, had introduced a new "hidden menu" in collaboration with Tim Ferriss of The 4-Hour Chef, to its bakery cafes in New York City. Our curiosity -- and OK, maybe jealousy -- piqued, we spoke with Panera executive vice president and chief concept officer Scott Davis to find out more about the menu and why it wasn't available in St. Louis locations. At the time Davis told us testing for this project was simply easier to launch in Manhattan, with only four bakery-cafes there versus the many in St. Louis. We cede, if not still slightly territorially, that that's a fair explanation.

Our long local crisis is over though, St. Louis. Today the hidden menu hits bakery-cafes nationwide.

Panera's hidden menu has been available online since its test-market launch this past fall, but Gut Check caught up with Kelly Obermeier, Panera marketing manager, and Don Hutcheson, Panera's director of operations, to learn more about the menu, its ingredients and nutrition stats, why it caters to a separate set of diets and lifestyles and how to order off the thing -- it's hidden, after all.

Hutcheson explains that test marketing in Manhattan was generated largely through social media and word-of-mouth, with no information about it posted in bakery-cafes. The same "order off-menu" approach carries over to bakery-cafes across the country -- so St. Louisans eager to try the new dishes should review items online before visiting a location. Hutcheson says members of the company's rewards program MyPanera will receive an e-mail this week officially announcing the hidden menu's national debut.

As for the items on the hidden menu, Hutcheson says the focus is healthful, high-protein, low-calorie, slow-carbohydrate ingredients already familiar to Panera customers. "We're using a lot of the same ingredients that we currently have in our bakery-cafes, except we're putting them together differently to give some of our customers a different alternative for dieting," Hutcheson says. "It's all based upon how the ingredients play together and what type of meal they leave for the customers, what type of impact they leave for the customer, the flavor profile. A lot of the ingredients were chosen based upon a Mediterranean-style entree that's very flavorful, that has a lot of protein and good carbohydrates in it."

Items on the menu include two breakfast bowls and a third lunch-and-dinner bowl, as well as two salads and a wrap, all filled with complex carbohydrates and protein. And thanks to that protein, despite each dish's low calorie count, they're still satiating alternatives to classic bakery fare. The "Power Breakfast Egg White Bowl with Roasted Turkey," ($5.29) for example, clocks in at 180 calories, seven grams of carbohydrates and 25 grams of protein, while the "Power Mediterranean Chicken Salad" ($7.99) has 360 calories with twelve grams of carbs and 35 grams of protein.

"I'm looking forward to it myself. At Panera, we see a huge shift every January with the eating habits of our customers. The salads really pick up, the healthier offerings that we have really pick up," Hutcheson says. "Just as everyone changes their eating habits in January, we want to make sure that we have the offerings out there that satisfy the needs of our customers."