A Twinkie by Any Other Name Would Taste As Sweet 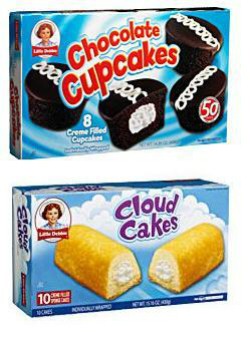 On a recent expedition to Shop 'n Save (7355 Manchester Road, Maplewood; 314-644-2908), Gut Check was heartened by the realization that recent seismic shifts in our personal snack-cake tectonic plates are not as soul killing as we'd originally feared.

What, you ask, was the sight that so warmed the Gut Check cockles?

To be perfectly honest, Gut Check didn't even know Little Debbie made Hostess clones until the bales and bales of Twinkies, Cup Cakes and Ding Dongs withered from local grocers' shelves (contrary to popular belief, a Twinkie's shelf life is a mere 25 days) and revealed the doppelgangers that had been concealed behind them.

A call to McKee Foods, proud owner of the Little Debbie brand, taught us a thing or two: namely, that since Hostess went bankrupt, Little Debbie's sales have skyrocketed.

Cloud Cakes, incidentally, have been around for at least six years (they were originally called Golden Cremes), while Chocolate Cupcakes were introduced two years ago. Little Debbie also produces the venerable Swiss Cake Roll -- cf. the Hostess Ho Ho, which actually is a knockoff of the Swiss Cake Roll; take that, Hostess snob!

Mike Gloekler, communications and public relations manager of McKee Foods, isn't ashamed to admit that Little Debbie created its ersatz snack cakes for the express purpose of going toe to toe with Hostess. In fact, he's proud of it.

"We introduced the Chocolate Cupcake to directly compete with the Hostess Cup Cake, which was number one in the cupcake market," Gloekler says. "In eight weeks our cupcake took over that number-one spot."*

Not that it has all been yellow cake and dairy-free cream, however. "Once Hostess went into bankruptcy, they started very aggressively pricing their products down to meet Little Debbie's price points," Gloekler says. "We had very serious competition with them while they were in bankruptcy."

Karen May, Shop 'n Save's external communications manager, says that the stores "have carried Little Debbie products forever. We didn't just start carrying them in response to the Hostess situation."

That there's a life lesson, kids: Sometimes it takes a tragedy the size of a Hostess factory to make you see what's been right in front of you all along.

* We misunderstood Mike Gloekler's chronology, which led us to misquote him in the original version of this post. As the corrected quote indicates, Little Debbie's upstart Cupcake unseated Hostess' from the top spot a mere eight weeks after its introduction two years ago.