Rick Majerus loved to eat. That was no secret. But what were some of his favorite St. Louis eateries?

Last week Gut Check caught up with several local restaurateurs whose tables often served as sanctuaries for the late great SLU basketball coach. The following (in no particular order) are six of Majerus' favorite places and dishes:

Owner Giovanni Grabriele says, "Coach Majerus was a great guy. A funny guy. A very friendly person. Giovanni's was his favorite, he used to come all the time. He loved the pasta with the smoked salmon, the veal chop with the truffle sauce. He was coming very often. We miss him, the guy."

Owner Rich LoRusso says, "He would always get the cioppino. He said, 'You know, I've been all over the world and you have the best cioppino.' Coach Majerus said it was the best. We're going to rename it 'Cioppino al Majerus.' The guy would sit there, we would talk about everything, we would talk about family. The week after they lost to Michigan State [in the third round of last year's NCAA tournament], I said, 'How you get your guys to play? It's like magic.' He said, 'Thank you.' His former players would come in. They'd say, 'We used to play for Coach. He told us to come here.' He was just wonderful."

Shea Behymer, director of operations over at Herbie's in the Central West End confirms that Coach Majerus liked pretty much everything on the menu. Behymer says, "He was always very nice, very jovial. The guy loved his food. I can't say there was any one dish he liked in particular. He did love the braised short ribs; he'd usually do all of the specials. He would usually come in with friends. He was very talkative. He didn't find a food he didn't like."

According to Larry Fuse, Jr. at Lorenzo's, Coach Majerus loved Gelato Di Riso's homemade gelato, his favorite flavor being straciatella (chocolate chip). Gelato Di Riso's Stephanie Hof makes the gelato by hand. She tells RFT why Majerus loved that particular flavor: "It's not a vanilla base, it's just a pure base that you could put anything on. All our bases come from Italy. We add dark chocolate, it's liquid when it goes in and then it hardens. Since we make it here, it's fresh, there are no preservatives. It's not whipped, there's no air in it, so it's denser. It's just delicious. It's one of our most popular flavors." 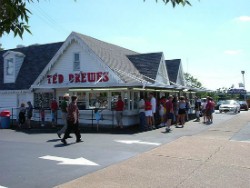 Ted Drewes Frozen Custard has been a St. Louis institution since 1930, and Coach Majerus quickly discovered the dessert's charms on his arrival in town. An unnamed manager at the Ted Drewes' Chippewa location tells RFT, "We'd get orders from [the St. Louis University Athletic Department] all the time." Drewes' honey-laced frozen custard was so popular with Coach Majerus that it was served at his memorial service at Chaifetz Pavilion.

Two Scoops After Dinner Mint with Hot Fudge The Ice Cream Martini Fountain on Locust's Joy Christensen says, "Our doorway would seem very low when Coach would come in with his 7' players. Mostly he came in alone or would order to-go when he couldn't make the three block trip from SLU campus. A big hearted man, he enjoyed our staff. One day he told us he wanted us to have his dear mother's chili recipe that he remembered fondly from growing up; he called it a "budget recipe." It was a typical '50's homemaker's chili with a tomato soup base! We asked permission to "improve" it a bit, make it healthier and heartier, and Coach still loved it, so we had it on the menu for over a year before the idea struck to open up chili recipe submissions to everyone with "Customer Chili of the Week." Coach still ordered up to-go quarts of "his" chili, sometimes 40 at a time to give out to friends. Here's to our friend and Fountain on Locust supporter, Rick Majerus."