Honk If Your Goose Is Cooked! 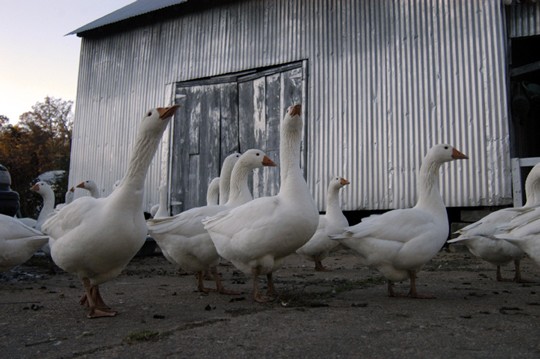 Want to try something old and new for Christmas dinner? Sassafras Valley Farm -- located in Morrison, on the southern bank of the Missouri River midway between St. Louis and Jefferson City -- has the answer:

But you have to act fast and order it by tomorrow, Tuesday, December 18.

The holiday goose is by no means a newcomer to the Christmas table, but it's a rare bird on the contemporary American groaning board. So much so that Sassafras Valley Farm appears to be one of only two goose producers in the nation and might be the only farm in the U.S. to raise free-range geese.

Sassafras Valley co-owner Connie Cunningham lives by the motto, "A happy goose is a healthy goose." She'd been working as a landscaper in Chicago when she came home for a visit and found that her mother's farm was in need of help. She and her brother Bob kicked around a few ideas -- perhaps a vineyard or apple orchard -- but nothing clicked. As the holiday season was fast approaching, the siblings found themselves reminiscing about the ghosts of Christmas geese past, and the rest is poultry.

Every day Cunningham tends to 400 geese and 200 ducks, which roam free on 40 of the family farm's 80 acres, watched over 24/7 by two Pyrenean mountain dogs that keep the coyotes and hawks at bay. (Geese are herbivores but ducks are omnivores; in order to guard against infection, the flocks are kept apart.)

"We keep them in a very stress-free way, where they can exhibit their own natural behavior," she says. "We have 40 pear trees that we've planted, and apple trees -- older varieties that drop -- so I don't have to kick things for them. They can wander under the trees at will, after the fruit ripen up."

They also buy local feed from their neighboring farmers. "My favorite one is the watermelon farmer." says Cunningham. "I get truckloads of watermelon."

The geese aren't cost-efficient to raise -- they aren't fast growers or prolific layers -- and that's reflected in the market price, which starts around $90.

"Geese are a very seasonal item," Cunningham says. "Usually we get a few orders for Thanksgiving, if people want to try something different. Most of our geese go out for Christmas dinners. Then we have a smattering of chefs in St. Louis who really enjoy working with different meats, like goose."

Duck, though, are a lower-priced alternative, $20 $10 a pound for a three-pound bird. "It's not a seasonal bird," Cunningham explains. "You can raise them in half the time of a goose, so they're more affordable. The chefs and people who buy [ducks] from us know they're buying local food from a local family farm."

The farmer has grown somewhat attached to her flock's head gander, Gustav.

"I put Gustav in with the baby geese when they're about a week old and they bond with him. Geese learn by observation: Once the [baby geese] go out into the field, they follow him and watch what he eats. Again, that's another very natural way of raising the animals. It's not just a production line."