Gut Check spoke to Vires this morning, who says Table will have a decidedly different menu and ambiance than Home Wine Kitchen.

"It's going to be very different than Home," Vires says. "Home is comfort food; it's nice hearty portions. Grilled meat on the bone, things like that. [With] Table we're going to do kind of the exact opposite. Small plates, a little bit more elegant, composed. We're also going to have fun with the food. It's going to be playful, whimsical." 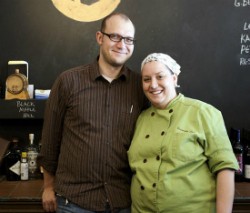 "As far as the bar program we're going to keep going with the line-priced wines," Vires says. "Josh is really excited about the opportunity for the beer selection he can have down there. He's already picking out draft beers that he wants to have on tap.

A larger beer selection won't be the only new offering behind Table's bar, though. Vires says Table will have a hand-crafted cocktail menu, too.

"Something new is we're definitely going to expand into the cocktail program as well," she says. "We're looking to bring somebody on who can really take charge over that and create a really great cocktail scene."

Currently Table is slated to open in early June.

"We're really excited for the neighborhood. Josh and I both really love Benton Park," says Vires. "We're happy to be down there. We're going to have a similar philosophy to service as we have at Home, which is really community driven and comfortable."