Arby's Commercials Are Just The Worst: An (Incomplete) Historical Accounting 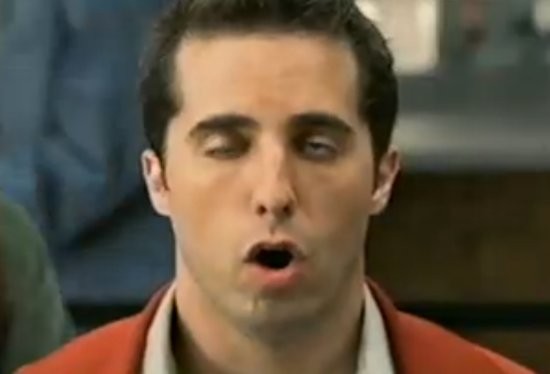 Have you noticed the latest ad campaign from Arby's? It features a "legendary detective" trumpeting the fact that Arby's doesn't get its meat from a "factory," as Subway does, but slices it fresh in the restaurant.

In one of these ads, this detective even tries to give a meat slicer to a Subway employee (we're meant to assume she must be a real Subway employee because the ad blurs out her face) through the drive-thru window, which

1) There are drive-thru Subways?

The new ads are terrible, unpleasant to watch and unlikely to tempt even @DadBoner to pig out on some roast-beef sandwiches and curly fries.

In other words, the new ads are just like every other Arby's ad ever. Here Gut Check presents a brief, incomplete accounting of Arby's advertising awfulness.

If Arby's latest campaign doesn't strike you as that bad, it's because we have only recently left behind what might have been the single-worst ad campaign in the entire history of fast food:

Having obnoxious young "cool" guys with ridiculous catch phrases is one of Arby's go-to strategies, because the "Good Mood Food" dude succeeded this über-bro:

"Good Mood Food" Guy and Ka-Boom! Go the Dynamite Dude are annoying. The fellow in this ad is downright terrifying. Watch in horror as his reactions to Arby's go from orgasm to seizure to, we suspect, stroke.

(By the way, did you recognize the now-TV-star gigging as one of the Arby's employees in that ad?)

Ads that just creep you the fuck out are a reliable Arby's trope:

And you thought the Hulk Hogan sex tape was nightmare fuel.

What sad human beings who cannot appreciate the majesty, the wonder, of the natural world. And what, pray tell, feeds their sadness? (Hint: It's good mood food.)

"But surely," you ask, "Arby's ads haven't always been this bad?"

Check out this spot, which manages to be terrible and to insult Arby's target audience. Though it does get points for not mentioning the food.

This ad, from the height of Pac-Mania, manages to make the iconic video-game character seem as limp and bland as...well...a freshly sliced piece of Arby's roast beef.

Frankly, Arby's should follow countless ad campaigns before it and embrace irony. This might be a good place to start: