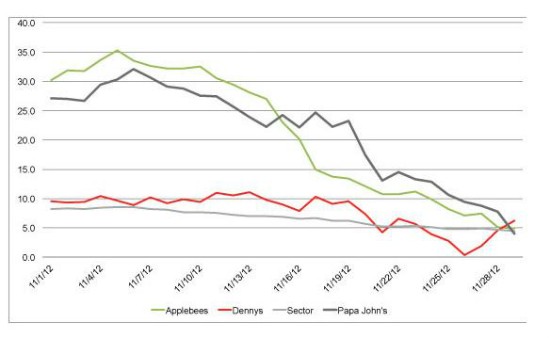 And how has boycotting the Patient Protection and Affordable Care Act worked out for these restaurants so far? According to a recent survey by YouGuv Brand Index, not so great.

Update: Shortly before Gut Check published this post, Huffington Post reported that yesterday Cheesecake Factory chief executive officer David Overton also commented on how "Obamacare" will effect businesses. Overton said the following on CBS This Morning on Monday: "It will be very costly. I believe most people will have to do that [raise prices] or cheapen their product."

Researchers from YouGuv Brand Index, who examine public brand perception, measured the "buzz score" of Papa John's, Applebee's and Denny's based on survey results posing the question, "If you've heard anything about the brand in the last two weeks, through advertising, news or word of mouth, was it positive or negative?" to adults 18 and older who ate at a casual dining restaurant within the past month. The buzz score range places restaurants on a sliding scale of Zero to 40, with higher scores reflecting, um, the most positive buzz.

Though all three national restaurant chains scored high buzz scores leading up to and on Election Day, the following weeks haven't been as kind. For instance, on Tuesday, November 6, Papa John's buzz score hovered at a high 32, but eight days later it dropped to 22 and shortly fell further to its present score of 4.

Papa's drop is the sharpest, but Applebee's has fallen from a score of 35 to 5. Denny's also experienced a descent from 10 to Zero, but now leads the pack with a score of 6. YouGuv Brand Index points to Denny's chief executive officer John Miller's apology for Metz's remarks as one possibility for the restaurant chain's bounce back.