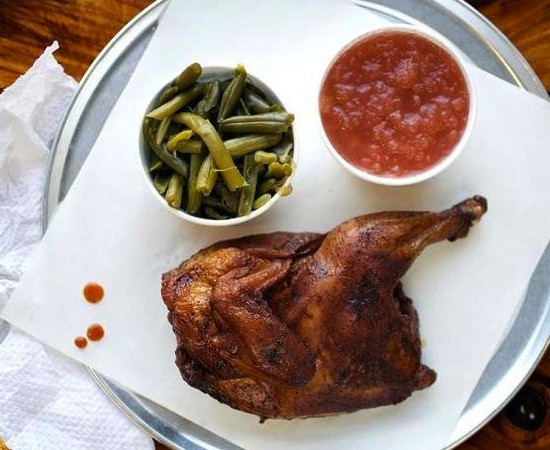 PM BBQ opened its new location at 161 Long Road in Chesterfield yesterday. The restaurant relocated from a very short distance away. Its original location, tucked into the shopping plaza at Long Road in Edison Avenue, closed at the end of last month.

Owners Paul Lamers and Mark Ruck opened PM BBQ in March 2010. Reviewing the restaurant in December of that year, I was especially impressed by the beef brisket and chicken.

The chicken looks to be a fryer, and a small one at that. The dry rub gives its skin an appealing reddish-brown color, speckled with flecks of black pepper. The rub has a mildly peppery flavor, accenting rather than dominating the poultry. The meat is tender, especially the dark meat, with a good balance between the bird's natural flavor and the smoke from hickory wood.

Smoked for twelve hours and as tender as medium-rare roast beef, the brisket is as good as any in town. Brisket is a cut that's prone to dryness, which makes PM's preparation all the more impressive, given that they slice the meat about a quarter of an inch thick, not paper thin, allowing a smaller margin for error. These slices are also the ideal heft for conveying the meat's rich flavor without losing the nuances imparted by the smoke.