PETA Has Beef with Nicole Westbrook, the "It's Thanksgiving" Girl

People for the Ethical Treatment of Animals has a bone to pick with Nicole Westbrook, the 12-year-old South County-native who's been burning up the webwaves with her single "It's Thanksgiving." (If you don't know what we're talking about you need to go here immediately.)

Westbrook has gotten her fair share of abuse. The haters claim various reasons to be offended -- as recording artists, as lyricists, as people with ears.

But PETA members have a new one. They are offended as vegetarians.

Specifically, PETA says it's pissed that young Westbrook is celebrating the murder, dismemberment, and consumption of innocent turkeys. She's so cold-blooded, she had the audacity to pick up a severed limb (also known as a turkey drumstick) and sing into it.

Here's the missive they sent out:

PETA's youth division is planning to send to 12-year-old YouTube sensation Nicole Westbrook: a Tofurky dinner. The group hopes its gift will inspire the "It's Thanksgiving" singer to hang up her drumstick microphone and start singing the praises of healthy, humane vegan holiday meals instead.

More than 250 million turkeys are killed in the U.S. every year--45 million for Thanksgiving dinners alone. Turkeys are protective and loving parents as well as curious explorers who can climb trees and run as fast as 25 miles per hour. Like Westbrook, turkeys love music and sometimes even "sing" along. But most turkeys slated to be killed for food are crammed into filthy warehouses, where disease, smothering, and heart attacks are common. 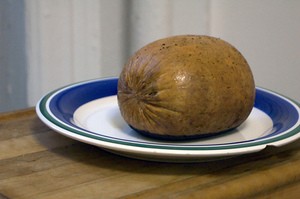 On Tofurky: It looks a bit like the beast with two butts. But make no mistake -- no butts were harmed in its production and it is 100 percent vegetarian. Apparently one of these bundles of soy is on its way to Westbrook's home. If you need any tips, Nicole, here is a list of ways to make Tofurkey edible.

On Westbrook's turkey drummie mic: PETA, we are fairly certain that is not made of real turkey.

On this PR ploy: Regardless of one's personal feelings about "It's Thanksgiving," the song is an unequivocal hit. Twelve days after going live, Westbrook's video has over 9.5 million views and as Thanksgiving approacheth, more and more people are going to be talking about her, clicking on the video, and Googling her. PETA, while also a serious-minded animal rights organization, knows a great PR opportunity when it sees one. And latching on to Westbrook's rising (falling? exploding? imploding?!) star is, in Gut Check's mind, a stroke of evil genius.

And finally: In case anyone wants to enjoy Westbrook in suitably vegan fashion, here are some re-worked lyrics.

I made a fake. And I should take. A step and say temp-eh, temp-eh. The things you've mocked. And quinoa did. Oh yeah. OOH, yeah.