Naturally, watching the returns is a lot more exciting for Gut Check when great food and drink is involved, whether it's at a local watch party or through election food freebies (and yes, we know, it's illegal but whatever).

Here are seven presidential election watch parties and food freebies to consider after visiting polling places tomorrow. Did we forget something? Let us know in the comments section.

Update: Gut Check continues to post new specials and watch parties as we learn them.

White Castle In honor of the presidential election, White Castle locations across the country are promoting a voting opportunity of its own that pits its new sweet potato waffle fries against its original crinkle cut fries. Cast a vote for which fries you prefer and as a reward White Castle will furnish a coupon for free fries.

Ben & Jerry's Gut Check phoned Ben & Jerry's (6380 Delmar Boulevard, University City; 314-721-8887) in the Delmar Loop to learn if it was selling its Stephen Colbert's Americone Dream ice cream flavor because, obviously. Happily we learned it is selling Americone Dream, in small ($3.99) and large ($4.99) cups for members of Colbert Nation.

Contemporary Art Museum St. Louis Compared to the election watch party at the Contemporary Art Museum St. Louis (3750 Washington Boulevard; 314-535-4660), opting to view the returns at home seems pretty lame. Its watch party coincides with artist Jonathan Horowitz's "My Land/Your Land: Election '12" exhibition in the museum's lobby, with eats provided on-site by food truck 2 Girls 4 Wheels. The nail-biting begins at 7 p.m. and lasts till the election results are in. 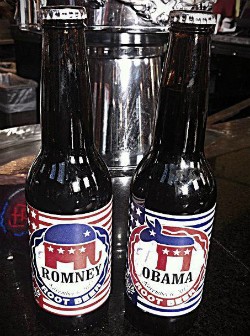 Fitz's Bottling Company Gut Check has documented the sales of Fitz's Bottling Company's (6605 Delmar Boulevard, University City; 314-726-9555) election-themed root beer bottle sales, and now that election day is almost here, we're ready to knock more than a few back. Choose from root beer bottles labeled and themed for President Barack Obama or Governor Mitt Romney, which cost $2.99 a pop, $9.99 for a four pack or $39.99 for a twelve-pack and are sold exclusively at Fitz's location in the Delmar Loop and on its website.

Moolah Theatre & Lounge The Human Rights Campaign invites the public to come together on election night at 6 p.m. in the theater of the Moolah Theatre & Lounge (3821 Lindell Boulevard; 314-446-6806) to watch the returns. This event is free to attend. An R.S.V.P. with a $5 membership to the Human Rights Campaign gets guests a "vote" wristband, and an R.S.V.P. with a $10 membership gets a "vote" T-shirt.

The Royale It's no secret that the Royale (3132 South Kingshighway, 314-772-3600) in south city likes itself some American history and democracy in action. To commemorate this year's presidential election the Royale is hosting an election watch party that kicks off at 6 p.m. Live feed of election results will be screened on TVs inside the bar and outside on the projector in its back patio courtyard.

Gioia's Deli Gioia's Deli (1934 Macklind Avenue; 314-776-9410) is offering $2 off any of its sandwiches on election day. Simply flash an "I voted" sticker at the register to save two bucks on lunch or dinner.

Frida's Deli At Frida's Deli (622 North and South Road, University City; 314-727-6500) in University City, customers can claim 6 percent savings all day towards any order with polling proof in the form of a -- you guessed it -- "I voted" sticker. This deal is even sweeter if you stop in early, as from 7 to 10 a.m. Frida's is offering 12 percent off any and all orders.

Southwest Diner Via the Southwest Diner (6803 Southwest Avenue; 314-260-7244) Twitter account (@SouthwestDiner): "Come in tomorrow with your "I Voted Sticker," and get $2 off any Breakfast or S'West Specialty."