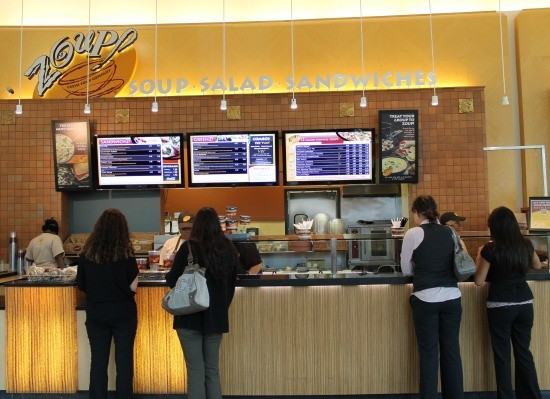 The food court at West County Center (I-270 & Manchester Road, Des Peres; 314-288-2020) will gain a new dining option with the opening of Zoup! tomorrow, November 1. Three guesses as to what Zoup! specializes in (hint: the cast of Seinfeld will be excited so long as the restaurant doesn't hire irate Nazis).

A franchise founded in Detroit in 1998, Zoup! currently has over 40 locations in northern states, including Michigan, Ohio and Massachusetts, as well as a few in Canada. Christina Wagner, who worked in finance for Monsanto for more than two decades, bought the franchise rights for the first St. Louis location; this is her first endeavor in the restaurant industry.

"I had a lot of time in the corporate world, and I just felt like I wanted to do something that was my own," Wagner says. "I had always wanted to do a franchise. When I looked at Zoup! and the concept, because it was unique to St. Louis, [I thought] it would make a great first business to go into."

"We mainly cater to white-collar workers, but then there's certainly a lot of individuals who want to eat healthy," Wagner explains. "We have very healthy varieties; we have low-fat, vegetarian, dairy-free. We also have soups that have gluten free ingredients in them. We offer more of the healthy varieties. But then again, we also have the good, down-home soups, the cream soups that people love, too."

Wagner says she settled on the West County Center after researching locations for a while because "if you look at malls in St. Louis, West County is one of the better malls," with a good balance of retail and business. Despite this, Wagner said she would probably not have another mall location for future Zoup! restaurants.

The two customer-favorite soups, lobster bisque and "Chicken Pot Pie," are on the roster everyday, but the ten other options are randomly chosen at the beginning of each day. The Zoup! exclusive soups are made from scratch at a proprietary location.

"My favorite item would be...the lobster bisque," Wagner says. "It's really, really good. It's has really big chucks of lobster in it and it's a cream-based soup."

Wagner says she is excited for the opening of her first restaurant, and so far things are going smoothly. She'sa lso looking forward to people in St. Louis to experience what Zoup! has to offer.

"They can expect a very clean environment. We have a lot of 'Zoup!-isms' that we go by [always be better, always serve the customer], so it's a different culture than what they might have experienced at other places," Wagner says.