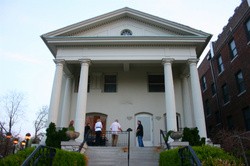 The legal dispute between the acclaimed Central West End restaurant Salt (4356 Lindell Boulevard, 314-932-5787) and its landlord appears headed to trial.

A "Notice of Bench Trial" was posted to the case's online docket last Tuesday, October 23, and a hearing has been scheduled for Tuesday, November 20, before Judge Barbara Peebles in the City of St. Louis.

To review: Ta Daa LLC, which owns the building at 4356 Lindell, in August filed a complaint of unlawful detainer -- essentially, occupying the premises without the legal right to do so -- against American Larder LLC, as Salt is legally known. According to that complaint, Ta Daa served American Larder with a notice of default on its lease due to unpaid rent and then a notice of termination of that lease.

After Ta Daa terminated the lease but before it filed its unlawful-detainer complaint, American Larder paid its landlord $51,025.97 in rent and late fees, which sum American Larder's attorney, C. Scott Brinkman, told Gut Check the restaurant had to calculate itself.

A hearing on Tuesday, October 16, before Judge Calea Stovall-Reid in the City of St. Louis didn't appear to resolve the matter.

We say "appear" because though Gut Check attended the hearing, which took place in open court, we were unable to hear anything but a few snippets of coversation between Judge Stovall-Reid and the two attorneys: Hugh Eastwood, representing landord Ta Daa, and Brinkman for American Larder.

The attorneys stood directly in front of the judge's bench as they made their arguments, and multiple other items of court business were taking place at the same time, making it difficult to hear the conversation.

Gut Check has been unable to reach either attorney for comment on the pending hearing as of yet. More as we learn it.