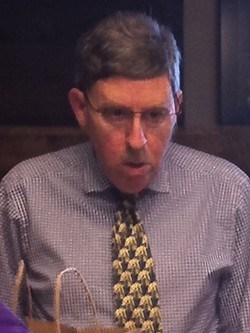 It was Tuesday -- only one day since Gut Check broke the story of a Scamwich Artist who has allegedly scammed or tried to scam free food from Kwan's and several other area establishments -- and who should be standing at Frida's counter during the lunch rush but the Scamwich Artist himself: Mitchell Kerman.

Kwan tells Gut Check that she was in Frida's back office when Kerman arrived yesterday, but the employee working the counter recognized him and summoned her. Kwan headed for the front of the restaurant -- though not before preparing her phone's video camera to record the encounter.

Kerman had called in a carryout order under the name "Mike." Kwan says she immediately confronted him over this pseudonym: "Your name's Mitch Kerman."

He confirmed that it was.

She quoted him the total for his carryout order and then asked him, referring to his prior visit to Frida's, "Are you going to pay for the burgers I gave you for free?"

He mumbled that he would.

"I expect you to tip my staff," she added.

Kwan tells Gut Check she couldn't resist one last twist of the knife.

More than anything, though, the Scamwich Artist's return unnerved Kwan. Until he'd followed through and paid for his food, she didn't know what exactly he intended to do.

St. Louis restaurants: Do you think the Scamwich Artist got -- or tried to get -- you? Drop us a line!