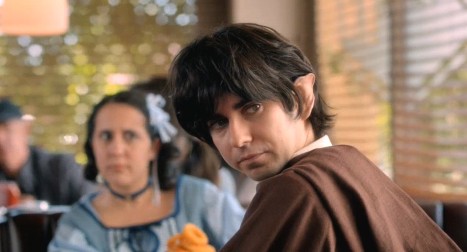 Advertising Age reports that on November 6, Denny's will launch a limited-time menu inspired by Peter Jackson's film The Hobbit, to be released on December 14.

Because Bilbo Baggins wouldn't be at all horrified by Denny's "Build Your Own Hobbit Slam," which is a real thing it's serving. What, like carbo-loading six times a day is acceptable but cannibalism makes you a monster?

But then there's "Bilbo's Berry Smoothie," "Hobbit Hole Breakfast" and "Lone-Lands Campfire Cookie Milk Shake," which though nonsense, are so bad we can't help but smile. You're crazy for this one, Denny's.

In total the menu includes eleven breakfast, lunch and dinner meals. National promotion of the Hobbit menu launches November 12 and, according to Advertising Age, the menu will be available at Denny's through early January.