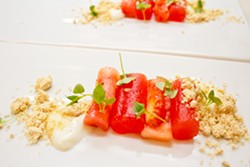 September was an exceptionally busy month for restaurant openings. Notable debuts included the lastest venture from Gerard Craft, the new tasting-menu concept from Mike Randolph, a new barbecue spot from prolific restaurateur Mike Johnson, a new barbecue spot from the prolific team of Dr. Gurpreet Prada, Ami Grimes and chef Chris Lee and a bricks-and-mortar location for one of St. Louis' most popular food trucks.

In fact, September was so busy that Gut Check is still playing catch-up. Among the openings and changes that we have yet to report, Craft Chophouse is now open at 210 South Buchanan Street in Edwardsville, Illinois. Via Feast, Schoemehl's Southside Grill is now open at 7529 Michigan Avenue. Another story that we totally missed, via Sauce: Tachibana (12967 Olive Boulevard, Creve Coeur; 314-434-3455) closed a few weeks ago. Opening in its place is a Thai restaurant called House of Thai.

As always, let us know in the comments about any openings or closings that we've missed.

Page through to see September's closings.

* - Closed in August, reported in September.