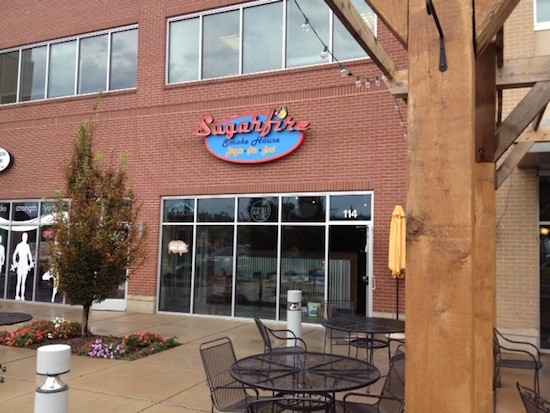 Sugarfire's work-in-progress website lists September 25 as the grand opening, but when Gut Check stopped by yesterday afternoon, the space looked almost-but-not-quite finished, and a sign on the front door announced that the restaurant would be open today.

We'll be sure to check back later today to confirm that Sugarfire opened as planned.

Update: (Wednesday, September 26, 1:05 p.m.) We grabbed a take-out menu when stopped by this afternoon to confirm the opening. Sugarfire offers smoked brisket, pulled pork, turkey breast, housemade sausage and baby-back ribs. The brisket, pulled pork and turkey breast are available by the quarter- half- or whole pound or as a plate (six or eight ounces with two sides) or sandwich (six or eight ounces with one side).

Ribs are available as four bones, a half-rack and a full rack (one side for the four bones, two sides for the half- and full racks.) Sausages are sold by the link. The sides include potato salad, cole slaw, baked beans and fries.

Sandwiches include a BLT with pimento cheese and a chicken thigh smoked, breaded and fried, tossed in hot sauce and served on a biscuit. Burgers feature a blend of grass-fed beef chuck, brisket and short rib from Rain Crow Ranch.