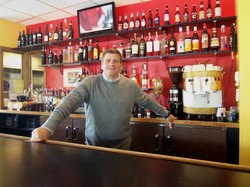 For now the restaurant is open from 5-10 p.m. Monday through Thursday and from 5-11 p.m. Friday and Saturday. Look for lunch service to begin in a few weeks.

- We told you in June that Ron Buechele, owner of Mad Art Gallery (2727 South 12th Street; 314-771-8230) in Soulard, planned to open a barbecue joint called Capitalist Pig at the gallery. From Capitalist Pig's Facebook page (via Feast) comes word that the restaurant will open on Wednesday, October 10, at 11 a.m.