Point/Counterpoint: Which is Superior, Waffles or Pancakes? Pancakes FTW

According to the Internet, -- and other credible sources, like Waffle House -- the first week of September is National Waffle Week. Our first thought at Gut Check International Headquarters was: Why do pancakes only get one measly day of celebration, while waffles are awarded an entire week? It was a divisive question, spurring loyalists on both sides of this age-old breakfast debate. Today we dissect the subtle nuances of both in an attempt to answer the question: Which is the superior A.M. carbohydrate, waffles or pancakes?

On the heels of a limp defense of waffles, Gut Check throws down for pancakes.

Texturally it is the pancake that has been tried and true across continents and eras as the superior vehicle of breakfast carbs. In Japan boys and girls enjoy yaki pancakes, Eastern Europeans do blinis, around Hannukah the Chosen People choose latkes, and Indians have long delighted in dosas. Across generations and continents, the people have chosen pancakes for their uncanny ability to spread and distribute toppings evenly. It is a truly democratic staple.

What's there to do with waffles? Pour the batter, close the machine, push a button, and wait for the timer to go off. BORING! Why don't we just raise a white flag now to the robot overlords. 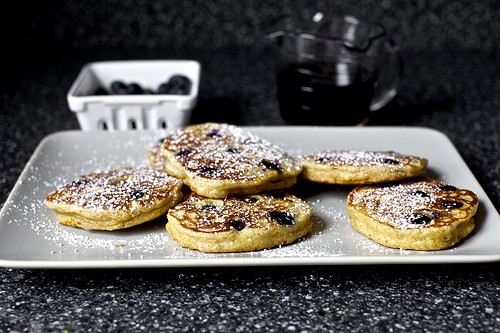