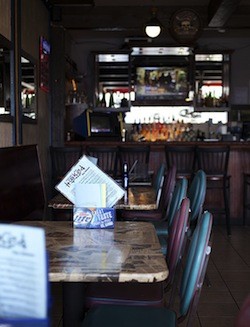 While stopping for lunch at another restaurant in Jeffrey Plaza this afternoon, I noticed that Hooked Seafood Bar (8613 Olive Boulevard, University City; 314-997-8886), which debuted late last year, wasn't open during its posted hours. While the restaurant hadn't been cleaned out, it didn't look ready for service any time soon, either.

Calls to the restaurant went unanswered. A visit to its Facebook page, however, yielded an interesting, somewhat cryptic message from a "TH," who called himself the "Mop Pusher."

At the time that I reviewed Hooked Seafood Bar in February of this year, its general manager and head chef was Tuyen Hua.

Thank you everyone for supporting Hooked Seafood Bar since Dec of 2011. Throughout this time we met wonderful people from all over Saint Louis and surrounding states.

I'm really proud of the people I worked with. I felt that we had a really concept and semi-themed restaurants. At our best we did land some decent positions and reviews on the Riverfront Times, Urbanspoon, St. Louis Post Dispatch, Yelp, etc...

Unfortunately, due to creative differences I will no longer be attached to Hooked. Some of you in our close circles know and understand the situation and I thank you for your criticism, undying support, and understanding as well.

As always, food, cooking, and hospitality are one of my many passions. I feel that food always brings people together at any given time and I will always enjoy cooking and experimenting with new dishes!

For now, I'll take off this hat and I wish the best for the staff Hooked Seafood Bar and their future endeavours!

I called over to the Hua family's other restaurant in Jeffrey Plaza, Pho Long (8629 Olive Boulevard, University City; 314-997-1218). The employee with whom I spoke said her owner had closed or sold the business, but wasn't sure of the exact situation.