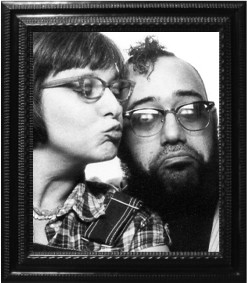 Truth be told, it doesn't take a carpetbagging cocktail shaker to lure Gut Check to a bar (any bar, let alone Taste, where it's only a matter of time till Ted Kilgore names a gimlet after us (or bans us for life). But after skimming Esmon's and Gaal's planned drink list for the (5-10 p.m.) event, we were persistently messaging Kilgore for details.

"This is the first time we have done this," Taste's bar master responds via e-mail. "Just so happend that Phoebe and Christian were in KC and we decided to have a little fun while they are here."

Kilgore explains that Esmon and Gaal, who are based in Philadelphia and engaged to be married, are old industry friends.

"They are working for tip-share," he says. "The idea is to share information an get a glimpse of what is going on in other cities."

As for that glimpse, pick your poison:

Each bartender will offer two classic cocktails and two originals.

In the classic vein, Esmon offers: the Bailey, made with gin, fresh grapefruit and lime juices, a pinch of sugar and fresh mint; and the Bentley, made with apple brandy, red Dubonnet and orange bitters. Both date back to the 1920s.

Gaal goes with: the Saratoga (c. 1880), which consists of equal parts rye, Cognac and sweet vermouth, plus a dash of aromatic bitters; and the Air Mail (1949), made with gold rum, fresh lime juice, honey and sparkling wine.

Let's just say they had Gut Check at Bailey.

If we're still able to hold a glass, we might or might not move on to the visitors' original creations, their verbatim descriptions of which you may click through to read.

A Scandal in Bohemia (2008) In this case, Holmes is smitten with (and outfoxed by) a brainy American actress. Rye, absinthe, ruby port, orange Curaçao liqueur, orange bitters.