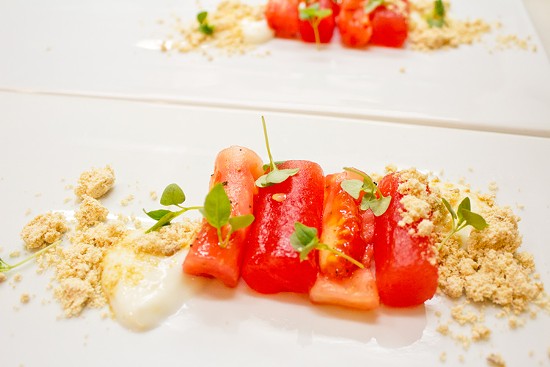 Ingredients like xantham gum and citric acid might sound scary when they pertain to the palate, but rest assured that at Little Country Gentleman (8135 Maryland Avenue; 314-725-0719), restaurateur and chef Mike Randolph's new concept set to replace Medianoche's progressive Mexican dinner spot, they're only there to help put the "art" back into culinary arts.

After Half & Half does its thing during the day, Randolph, along with his chef de cuisine Dale Beauchamp and sous chef Chip Bates, dive right into their precise food experiments with an emphasis on technique and presentation, tweaking here and there as they go. 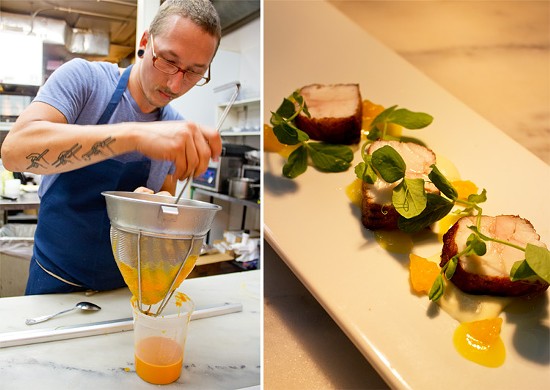 With binding agents and aids like the ones listed above, they can do things like glue together walleye to cook in blocks. They're aiming to start serving their Midwest-focused three-course, six-course and grand tasting menus by mid-September but don't intend to open doors until their initial dishes are perfected.

As RFT cafe reviewer Ian Froeb reported back in July, one of the primary motivations for moving forward from Medianoche is to allow for more creative freedom. Randolph says he's looking forward to taking the best of Medianoche and applying it on a daily basis. Tip of the Tongue stopped in to get a glimpse into what's to come. 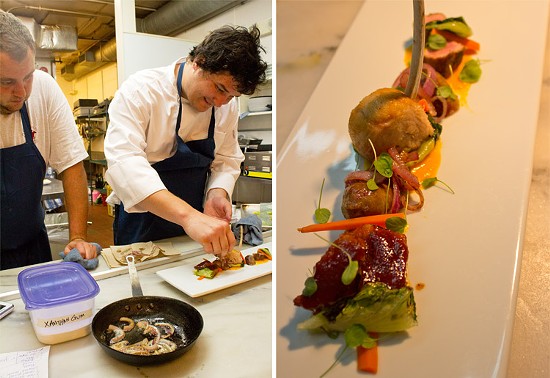 The menu available at the bar will complement the food. Expect the likes of sour, acidic beers, saisons and local hoppy beers; stirred not shaken cocktails that include vermouths, Americanos and things of that nature that won't wreck the palate; and an old world wine list with vibrant, expressive, and racy flavors. Parseliti mentions the term "terroir," which loosely translates as "sense of place" to best characterize his intent with the wine list.

Even though the menu may sound intimidating, Randolph assures that the vibe for Little Country Gentleman is anything but.

"We take our wine, sourcing and cooking techniques very seriously, but we don't take ourselves that seriously," he says. "If you come in at 8 [p.m.] on a Friday in the middle of a push, you're more likely to hear us making fun of each other than yelling at each other. We have fun while we work and hope to take that sense of humor on the floor."