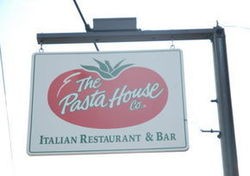 - We learned a couple of weeks ago that owners Kim Tucci and Joe Fresta would turn the upscale Tucci & Fresta's Trattoria & Bar (15 North Central Avenue, Clayton; 314-725-6588) into another location of the Pasta House Co.

The transformation was swift indeed. The new Clayton location of the Pasta House Co. is already open for lunch and dinner every day.