While RFTmusic was youthfully gallivanting in the rain at Loufest last weekend, Gut Check retained our dignity, embarking on an indoor mini-film fest abetted by Netflix, Family Video and our BFF, Chuck. It all began after we watched Crazy, Stupid, Love, in which Ryan Gosling's womanizing character reveals his foolproof panty-dropper: He plays "(I've Had) The Time of My Life" and re-enacts the lift move from the final scene in Dirty Dancing. Cue the collective swoon.

Reflecting on this classic film, it's only natural that one's mind would turn to beloved late actor Patrick Swayze, who passed away in September of 2009. Ours did -- and the next thing we knew, Gut Check was knee-deep in a pile of Swayze classics: We had the time of our life re-watching P Swayz dance-bang Jennifer Grey in Dirty Dancing; we smashed a bottle for the gratuitous boobage and martial-arts stylings of mysterious bad boy Dalton in Road House; we sat through Ghost. But #swayzefest came to its natural conclusion with an evening screening of Point Break, remastered on Blu-ray for maximum radness. 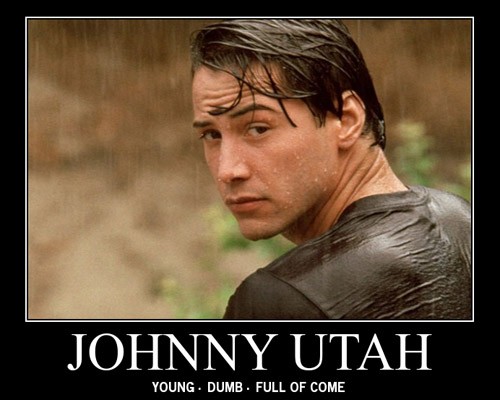 If you haven't seen experienced Swayze's adrenaline-fueled masterwork, your expectations for the crime drama starring Keanu "whoa" Reeves in which skydiving surfer hooligans rob banks while dressed like ex-presidents might be low -- Gut Check's certainly were. But this cynical approach only makes that inevitable moment when you suddenly realize this is the best motherfucking film ever made even richer.

In Point Break, rookie FBI agent Johnny Utah (Keanu Reeves) is paired up with veteran Angelo Pappas (Gary Busey). Working to catch the unstoppable team of ponytailed bank robbers, the Ex-Presidents, and suspecting that these robber dudes are also surfer dudes, the pair hatches a plan for Utah to infiltrate the local surfer scene in order to entrap these blond fucking hippies once and for all.

Kathryn Bigelow's fantastic approach to the action genre makes a fast-paced, thriller that could be dudely and dumb and a sincere, absolute joy to watch, from the artfully shot surfing scenes to the breathtaking glimpse out of a plane as Patrick Swayze gracefully, fearlessly flips backward out of it, then parachutes to the ground. The chase scenes (both on foot and with Busey at the wheel) are amazing, and although Bodhi (Patrick Swazye) is clearly a bad dude, brah, you secretly hope he'll find his way to that ultimate rush: the perfect wave. And, yeah, you're probably a little oddly, confusingly attracted to him. Reeves, too. But the only logical conclusion to Point Break "Marry Boff Kill" is to marry Keanu, bang Swayze and kill Busey. Sorry, Busey.

We started, as one does at Outback Steakhouse, with a bloomin' onion and a Foster's -- culinary delights that are Australian for "onion rings" and "Bud Light," respectively. At the Outback, one can order an obscene quantity of food for $9.99, so Gut Check did exactly that, opting for a six-ounce cut of the "Outback Special," the restaurant's "signature sirloin," which includes a salad or soup and your choice of side. The side choices are indicative of OB's clientele: Just as surfing attracts thrill junkies from all walks of life, the massive chain attracts everyone, from the traditionalists who prefer a classic loaded baked potato to the wacky sweet potato with honey butter and cinnamon crowd to the vegetable-medley set.

Mediocre as that steak and greasy, glorified, deep-friend onion were, we devoured every last bite. Because Bodhi, in his Zen, adventurous spirit, taught us that when opportunity presents itself, you take it -- and you don't look back.