Flying Pig at Guerrilla Street Food and The Bourne Legacy

Originally a trilogy starring Matt Damon as government-created super spy Jason Bourne, The Bourne Legacy appears to have been the brainchild of producers with dollar signs in their eyes. Other than a few pictures to provide some context for the film's back story, Damon's Bourne character is nowhere to be found.

Let's lay down some dots: The film follows Aaron Cross (Jeremy Renner), a product of "Operation Outcome" (which transpired via Bourne's successes in the "Treadstone Project") who possesses enhanced physical and mental capabilities courtesy of medication. Since Bourne is now running around the globe rogue and threatening to expose the government's black-ops projects, government officials call up retired United States Air Force colonel Eric Byer (Edward Norton), former head of all secret government projects. By this time, Cross has met up with one of the manufacturers of his medication, Dr. Marta Shearing (Rachel Weisz), which he needs continuing does of to retain his enhanced abilities. 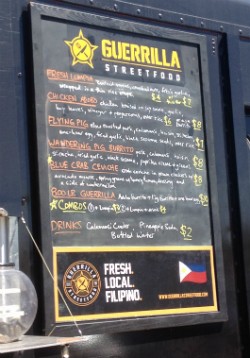 More than that, the two share something in common: Byer wants them dead for their involvement in "Operation Outcome." A worldwide game of cat-and-mouse ensues with the stakes progressively raised for all parties. (Did you connect all those dots yet?)

Thankfully the one common thread between the trilogy and The Bourne Legacy are the action sequences from all over the globe, primarily shot in Canada and the Philippines. Aside from that, the film's complex plot, chunky sequences and blatant disregard for the previous three films that share its name really hinder the film's potential.

Unlike the disjointed plot of The Bourne Legacy, the Filipino menu at food truck Guerrilla Street Food (@guerrillastreet; 314-529-1328) offers a different puzzle to solve: What to eat? Gut Check swung by the truck for lunch service and couldn't figure out what to order, so we deferred to the cashier for some advice. 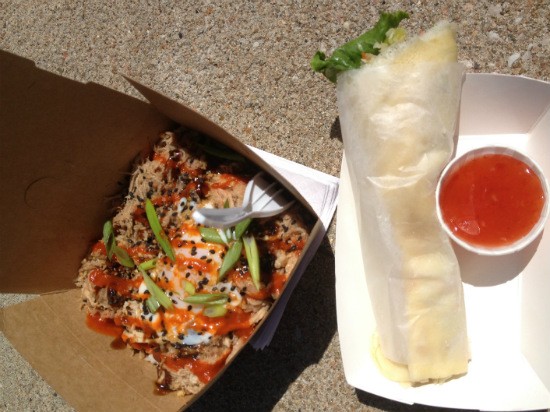 Eventually we set out for the "Flying Pig," a dish that wets your mouth more and more with every passing word in the description: A bed of rice is draped in slow-roasted pork, fried garlic, sesame seeds and a one-hour egg all slathered in hoison and Sriracha sauces. The yolk of the one-hour egg was quite unassuming, slowly oozing out after a soft drag of the fork across the whites; this added a fatty counterbalance to the spicy Sriracha and complex hoison sauces.

Gut Check also sampled a "Lumpia," sautéed vegetables, nuts and garlic wrapped in a rice crepe accompanied by a sweet chile sauce. Thankfully you don't need to be a super spy to locate some great Filipino food in town (but you can keep CIA-like tabs on there whereabouts via Twitter).