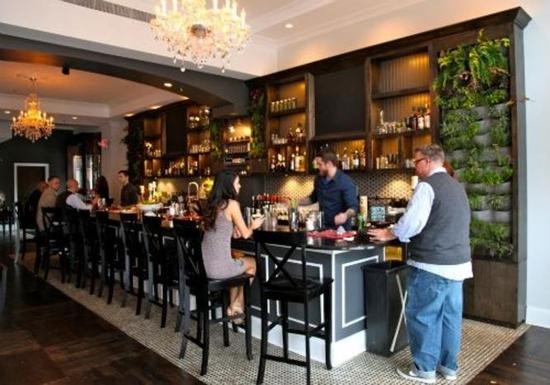 New restaurants will always have start-up issues, but at members-only Blood & Sand (1500 St. Charles Street; 314-241-7263) the management has encountered some rather unusual ones. The following is a Facebook post published by Blood & Sand chef Chris Bork on Thursday, August 9:

"Since we have opened Blood & Sand there have been residents who have been opposed to us. Not sure why, but they have let us know. We valet on St. Charles which is a one way street. We do not block the whole street, there is plenty of room for traffic to pass. In the beginning cops were called nonstop because we were doing this. No one parks on this street because there is no parking. I'm willing to bet everyone who owns/rents in the neighborhood owns/rents one of the spaces in the 3 parking garages. Next we dealt with a disgruntled resident who was smearing his dogs shit all over the handles of valet parked cars. Now we have someone throwing eggs at cars and employees from above in the terra cotta lofts. How is it that we are bad for you? Is it bad that young, driven people are trying to add something to the downtown in which you live. You may not like anything we do, but if our business is a success it is good for everyone."

Perhaps calling the restaurant's issues "unusual" was being generous.

Bork was unavailable for comment when Gut Check contacted Blood & Sand, but restaurant manager Adam Frager insists that the issues the restaurant has experienced with local residents doesn't represent the neighborhood as a whole.

Rather, Frager believes that the majority of the restaurant's patrons are locals who appreciate what Blood & Sand is bringing to their community.

"I strongly believe that the majority of people living around us want to see positive changes in the neighborhood," Frager says. "Most of our customers are local, many of them live in the building we're located in, and the vast majority see us as a positive presence in the community."

Frager told Gut Check that the police were informed of each incident, but he was unimpressed by the action they took -- or rather, didn't take. "The response to these problems we've had by the city police has been lackluster at best," he says.

It's Frager's hope that these incidents will stop so that Blood & Sand can continue to thrive and serve its community. "So many people have been appreciative of what we're doing and we hope to bring that same level of appreciation and respect back to the community."