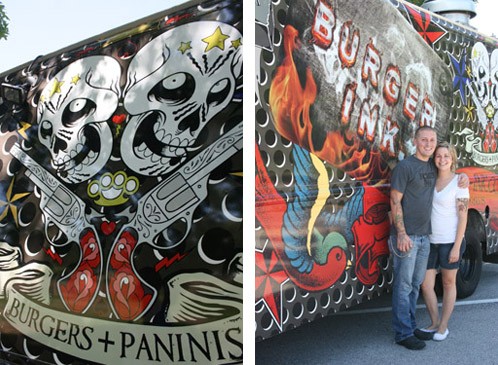 Speaking with husband-and-wife food-truck proprietors Tara and Josh Lemmon, it's easy to see what puts the "ink" in Burger, INK. The pair shares a fondness for body art, a theme that bleeds through to the name as well as the paint job of the business itself; the truck is emblazoned with tattoo elements that look like they were peeled from a hipster's half-sleeve. Colorful birds, fish, stars and banners mingle with the stylized and surprisingly inviting logo: two skulls with a pair of pistols, some brass knuckles and other assorted flair.

Josh, a recent graduate of Le Cordon Bleu who began cooking at the age of eight, has wanted to own a food establishment for as long as he can remember. "The instructors always ask you what you want to do, and I told them I don't want to work for anybody else. I want to open my own restaurant," he explains. One of those chefs introduced Josh to Shelley McMahan of Shell's Coastal Cuisine, a fellow alum. With some shared wisdom, a culinary degree and passion for food in tow, Burger, INK began to take shape.

"Halfway through school I'd bought the truck, and I started building everything myself. By the time I graduated [in May of 2012], I was pretty much done," Josh notes. And as May melted into June, the truck hit the streets.

So why did Josh choose burgers for his first post-graduate culinary venture? "At the time when I was building the truck, there was no burger truck [in St. Louis]," he explains. "Burgers are a very easy canvas to work with. You can do anything with them." Tara adds, "We wanted to make burgers better. There aren't many places that offer burgers quite like this. Not like we want to." 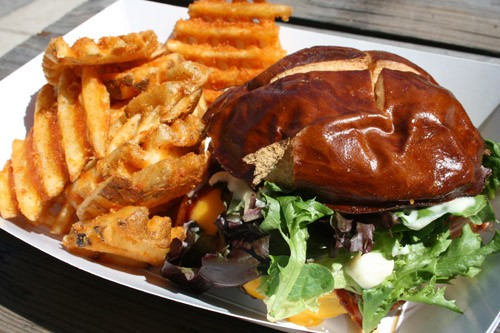 And this is how they do it: Tara's favorite burger, the "Benedicto," tops a beef burger with a fried egg, cheddar cheese, roasted-garlic aioli and spring greens on a pretzel bun ($8). The "Maui," Josh's pick, joins a lamb burger with grilled pineapple, teriyaki wasabi glaze and Provel cheese with the same aioli, greens and pretzel bun ($8). Other options include the "Dubliner," with Guinness-braised onions and smoked mozzarella ($8) and the "Turkey Lurkey" panini, thinly sliced roasted turkey, smoked mozzarella and aioli on crusty Italian bread ($7). All of the burgers, paninis and wraps are served with a side of richly seasoned, delectably crisp waffle fries.

Everything at Burger, INK is made from scratch (with the exception of the bread), and Lemmon takes pride in the housemade sauces. And while the Lemmons want you to try one of their original flavor creations, they still offer a tame, traditional classic. "I showed the menu to my sister, and she's like, 'There's nothing on here I would eat! You just have to have a burger with cheese,'" Josh laughs. "I said, 'That's boring as hell.'" Thus the truck's "Boring Burger" was born: a no-frills beef patty with American cheese on a dusted kaiser roll ($6).

The Lemmons plan to have another truck out within the year, but its theme and cuisine are under wraps for now. Look forward to an announcement from the Burger, INK team in the near future, and in the meantime, follow the truck @BurgerInk on Twitter and try one of the delectable burgers from its ever-evolving menu.

Want more food news and review from Gut Check? Subscribe to Tip of the Tongue, the Riverfront Times' food newsletter.