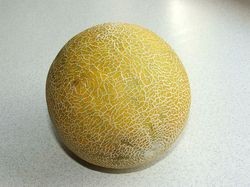 Put down that cantaloupe! Or, you know, at least check the sticker before you slice it open. Burch Equipment of North Carolina has recalled 188,902 of its Athena variety cantaloupes due to a risk of contamination by listeria monocytogenes.

(This is separate issue from the multiple recalls connected to Gills Onions that Gut Check noted earlier this week.)

According to the press release that Burch issued through the FDA, the recall has been expanded due to "unsanitary conditions found at the cantaloupe packing shed during FDA's ongoing inspection."

Illinois is among the states in which the cantaloupes were distributed. The cantaloupes have a red sticker with the name Burch Farms (or, in a few cases, Cottle Strawberry, Inc.) and the PLU 4319. There haven't been any reported illnesses connected to the recall.

The recalled beef was sold at retail as two-pound cartons of six patties under the Sam's Choice Fireside Gourmet Black Angus Beef Patties Bacon and Aged Cheddar brand. Neither Missouri nor Illinois were among the states in which the recalled beef was distributed, but, come on, you think Gut Check will miss a chance to note a gasket-related recall?