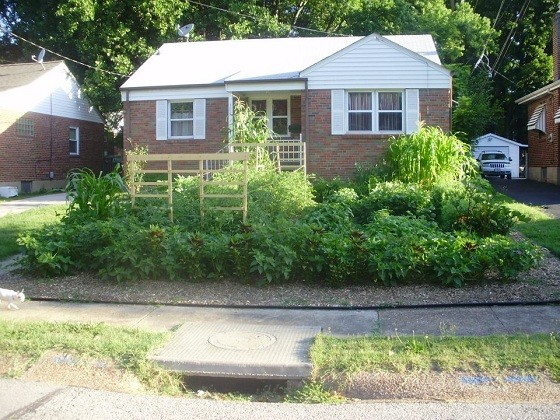 Update: (Tuesday, July 31, 2:45 p.m.) Karl Tricamo emailed us with the results of his appeal to the Board of Adjustments: "Appeal went well, and the City's [Ferguson] determination that the garden violates code was overturned."

Karl Tricamo thought he had found a harmless way to provide food for his fiancée and infant son this summer.

But when the recently laid-off Tricamo set out to plant a vegetable garden outside his Ferguson home, he encountered a small obstacle. The backyard didn't get enough sunlight. So Tricamo moved his garden to the front yard, tilling up a 25-foot by 35-foot plot of ground he's come to call a "yarden."

Today the yarden is in full bloom, sprouting multiple varieties of beans, corn, peppers, tomatoes, squashes and melons that Tricamo boasts were all planted by seed and are entirely GMO free. Yet the fruit of Tricamo's labors soon could be headed prematurely to the compost heap if Ferguson officials have their way.

In March a city employee visited Tricamo to inform him of an anonymous complaint allegedly made about the garden. A letter from the city arrived several weeks later, outlining various ordinances that the 29-year-old father is said to have violated.

Tricamo isn't buying any of it.

"Everything is within ordinance," Tricamo tells Gut Check. "But instead of working with me and giving me explanations for citations, the city chooses to harass and bully me."

Tricamo has taken the fight online, writing about his his battles with the city on his blog, Vegetable Yarden, and citing -- in his defense -- the wording of the very ordinances that city officials say he's violating.

"From the beginning, we've been wanting to reach a compromise for everyone involved," Ferguson City Manager John Shaw tells Gut Check. "We want to come to a conclusion and work with him."

Yet the fact of the matter, says Shaw, is that the garden violates city codes.

"Our priority has been in the interest of citizens," says Shaw. "This garden poses multiple safety issues, including erosion problems and attracting insect and rodents and pests."

Tricamo scoffs at that rationale, noting that he has installed an edging around the garden and laid wood chips on the soil to prevent erosion. As for pests, how would his garden attract animals that a backyard garden wouldn't? Meanwhile, Tricamo says all his immediate neighbors are in support of his garden.

Nick Kasoff, a Ferguson resident who lives nearby, is one of several supporters.

"I'm familiar with the ordinances, and based on what I'm seeing here, nothing looks to be out of ordinance," comments Kasoff.

As it stands now, the fate of Tricamo's garden will ultimately be decided at the city's Board of Adjustment meeting scheduled for July 25. Win or lose, though, Tricamo believes he's fighting the good fight and takes comfort in knowing that he's not the first person to disagree with a city about front yard gardens.

Last year a Michigan woman made national news when officials in the suburban Detroit town of Oak Park threatened her with jail time over her front yard garden. And in Tulsa this summer a woman sued the city after coming home to find that a municipal work crew removed her front yard garden.

Says Tricamo: "I could lose my garden tomorrow, and I will not have any regrets that I stood up for the right to have it."