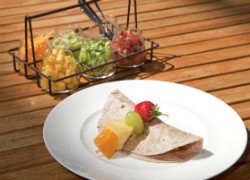 Last month, Gut Check reported that the Hyatt Regency St. Louis at the Arch (315 Chestnut Street; 314-655-1234) had announced a new initiative -- "Food. Thoughtfully Sourced. Carefully Served," -- aimed at offering customers healthier, locally sourced food options. This week, the hotel chain announced another new element of its food service overhaul, an initiative titled "For Kids, By Kids." So you can probably guess where this is headed.

As the name suggests, the menu was developed with the help of several focus groups of children ages five to twelve in partnership with Hyatt's own chefs. The purpose of these focus groups was to suss out exactly what type of nutritious food options kids responded well to -- and would eat, of course. The project resulted in a three-course, organic menu for children developed by celebrated chef and food writer Alice Waters.

While healthy food options for kids are now as commonplace as square pizza once was in elementary school cafeterias, the Hyatt's approach sets itself apart, says food and beverage director Marco Fabozzi.

"The major difference between [the Hyatt's] menu and other kids' menus is that we had kids help spearhead the push towards healthier, tastier kid's food," says Fabozzi.

Some of the new items include grilled -- as opposed to fried -- chicken and a sun-butter, banana and jelly sandwich. Subtle decisions like ditching peanut butter for sun butter, a lower-calorie alternative, make the menu healthier but still accessible for kids. Real-fruit smoothies and organic milk replace soda and other high-calorie, nutritionally challenged beverages and snacks.

In an attempt to make food engaging and fun for kids, certain menu items were specifically made with an interactive bend, such as customizing pasta dishes and "shaking up" salads. For breakfast, the "Top Your Own Taco" meal starts with a whole-wheat tortilla filled with scrambled eggs and cheese, and lets kids choose toppings to their preference.

According to Fabozzi, the new menu appeals to pint-size picky eaters and their health-conscious parents. "Being a parent I would completely gear myself towards this menu. Tastes of both kids and adults are becoming more sophisticated and we are trying to appeal to both," he says.

While this menu is designed with the health of kids in mind, adults can also order items from the menu, a move that also might encourage children to opt for healthier choices.