Lucas Prize is an uber-conscientious individual. While waiting to interview the bartender of Plush (3224 Locust Street; 314-535-2048), we watched as Prize filled drink orders for his servers during dinner service, doing little things like using a cocktail napkin to pick up straws for iced coffees and frothy cocktails so his bare (and probably impeccably clean fingers) never touched them -- something no one would ever see from the other side of the bar.

When a mix-up occurred and a flustered server was on the brink of dramatic overload, Lucas calmly asked her, "What would you like me to do for you right now?" which is probably the best way ever to soothe an itchy situation. A hot and stinky pair of students dragged themselves inside from the 100-degree-heat to the bar and asked for some water. Prize fills to-go cups full of ice and water and chats with them about new movies with the same warm and welcoming demeanor he greets the growing number of customers filtering into the bar. He is the type of guy whose name you expect to see engraved on an "Employee of the Month" plaque twelve times in a row. It's no surprise then that Prize has invested his heart and soul in Plush since its opening.

"This place is a melting pot," says Prize. "The shows we have are diverse -- hip-hop, indie, all kinds -- and that brings in different kinds of people."

After spending three years working bar and front of the house at a place he will not name -- but which makes him look noticeably dismayed -- Prize came on board at Plush during its planning stages.

"I had never seen a place like this, especially in St. Louis," says Prize. "A full restaurant and bar that's open morning until late night and with a music venue attached. It was really different."

Also a bit different was the cocktail that Prize poured for Gut Check. "It's called 'the Locust,' because, obviously, we're on Locust [Street]," explains Prize. The concoction combines cold milk and créme de menthe and tastes remarkably similar to a McDonald's Shamrock Shake -- but, as Lucas pointed out, it's "a great starting point for different espresso drinks and white Russian variations."

When we asked if anyone had ever asked for the cocktail at Plush, Prize admits it hasn't happened yet. "During a concert people are much more likely to ask for a Red Bull and vodka," he says. A "Cherry Bomb" cocktail is a common drink at any bar, but Prize added a twist to the drink on Plush's menu by adding Ciroc vodka. You can order it from him by asking for a "Ciroc O-bomb-a." 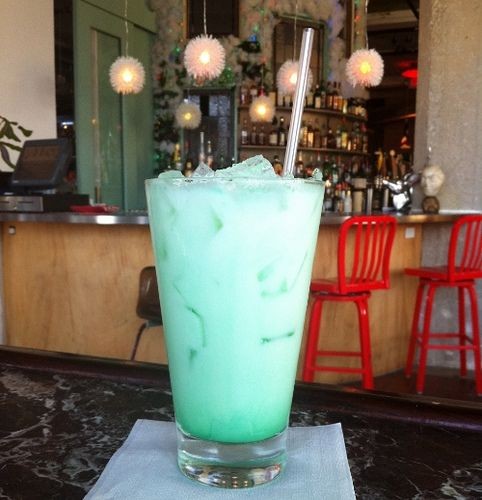 Combine milk, creme de cacao, vodka and ice and give it a few good shakes. Strain into a cold glass. Pour the créme de menthe down the sides of the glass to create a streaky effect and serve with a mint sprig.