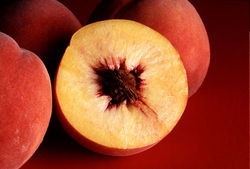 Did you know that today, July 17, is National Peach Ice Cream Day? Neither did we! Truth be told, this fact pisses us off. Here we are, getting ready to celebrate National Ice Cream Day this very Friday, July 20, and peach ice cream has to be like, "Oh! Look at me! I'm special! I'm seasonal. I deserve my own celebration a few days earlier to upstage all of you mere plebeian ice creams."

However, in the course of our deep investigative efforts to confirm that today is, in fact, National Peach Ice Cream Day, we found this collection of national food holidays, which contains 20 (at least) celebrations even more absurdly specific!

February 10 - National Cream-Cheese Brownie Day: "Oh. I'm cream cheese. I add a swirl to your brownie." Know what else adds a swirl? Flushing the toilet.

February 12 - National Plum Pudding Day: The plum-pudding lobby smartly realized it needed a day, any day, besides Christmas to associate with its client.

March 6 - National White-Chocolate Cheesecake Day: Beware this day, a Trojan horse sneaking terrible white chocolate into our lives in the guise of cheesecake.

July 2 - National Anisette Day: The one day of the year when you can't beat the crap out of someone who smugly claims that black licorice is the only true licorice.

July 10 - National Piña Colada Day: And now that song is stuck in your head, which is why this day is not only absurd, but evil.

August 1 - National Raspberry Cream Pie Day: Whatever you do, do NOT follow any links promising "raspberry cream pie" videos.

September 8 - National Date-Nut Bread Day: In the episode of The Sopranos titled "University," a troubled stripper tries to give Tony some date-nut bread. Later, she's murdered. Like those who celebrate this day, she learned only too late that nothing good comes from date-nut bread.

September 15 - National Crème de Menthe Day: Once, at a grocery store before a big snowstorm, I saw a group of four, two couples, stock up on nothing but condoms and a bottle of crème de menthe.

November 7 - National Bittersweet Chocolate with Almonds Day: You sign this Hallmark card with an epi-pen.

November 8 through 13 - National Split-Pea Soup Week: Dear Split-Pea Soup: You can be very delicious. Are you so delicious that you deserve an entire week while other soups receive a single day, if that? No.