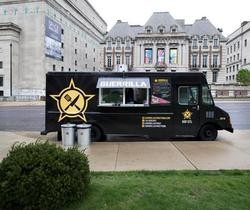 St. Louis food trucks will no longer have to battle for one of the precious few spots downtown that a) are legal parking spaces and b) don't infringe on the 200-foot "no-go zone" surrounding bricks-and-mortar restaurants. Beginning this week, the City of St. Louis is dedicating a block of parking spaces on 13th Street between Market and Chestnut as "Food Truck Row."

"We're hoping that this will allow food trucks to congregate in one spot [where] people will always to know to go," explains Kara Bowlin, press secretary to Mayor Francis G. Slay.

She adds that the city hopes "Food Truck Row" will also "take some of the pressure off downtown."

Bowlin believes that the location, near Soldiers' Memorial, the Peabody Opera House and City Hall, is ideal: "There's really not a ton of restaurants there." (She also notes that once St. Louis University moves its law school downtown, students and faculty will be only a block away from the trucks.)

Bowlin will work in concert with the St. Louis Food Truck Association to manage "Food Truck Row." Though she characterizes its first weeks of operation as a "soft opening," she says, "If this one works, it will be one of many.

"It's something the mayor supports."

Update: (Monday, July 9, 2:30 p.m.) I just checked with Kara Bowlin, and food trucks can still park elsewhere downtown, as dictated by the downtown vending zone map (see the "Cluster Truck" story below). Also, the original post had the wrong cross streets for the block of 13th: It's Market and Chestnut, not Chestnut and Pine.