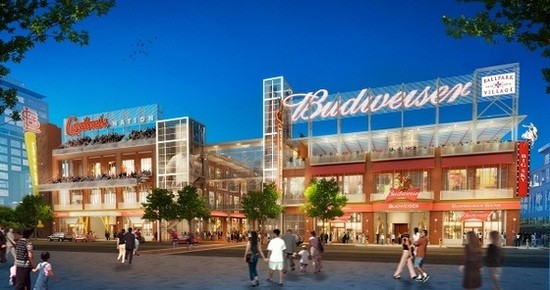 Oh, yawn, just another week in Anheuser-Busch InBev's Borg-like growth across the world.

First came news that A-B has agreed with the St. Louis Cardinals and developer Cordish Companies to be a tenant for the first phase of the long-delayed Ballpark Village project.

A-B will open a restaurant featuring "authentic German-inspired cuisine," 100 or so beer taps and a beer garden.

The Budweiser restaurant joins the Cardinals' own restaurant and team hall of fame on the nascent Ballpark Village roster.

Meanwhile, this morning A-B InBev announced that it had bought out Mexican brewer Grupo Modelo for $20.1 billion. (A-B already owned a 50 percent stake in Modelo before this acquisition.) The deal gives A-B outright ownership of the wildly popular import Corona.