Wine on the Haus: Lunching at 3500 Winehaus 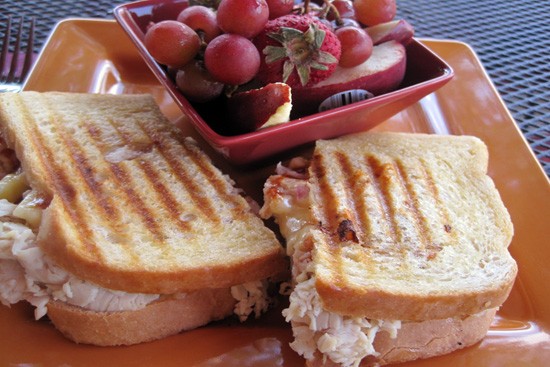 The Lunch: The "Memphis Blues" sandwich, with a side of fruit and a glass of pinot grigio ($9)

3500 Winehaus has been open for about a year and a half in Lindenwood Park. It offers something different from the nearby corner bars and neighborhood joints. Here wine's the thing. (It doubles as a carry-out wine shop.) Now, lunch is too: 3500 Winehaus has introduced a smallish menu of a half-dozen sandwiches and a couple of salads.

3500 Winehaus serves lunch from 11 a.m. to 2 p.m. Most items cost between $8 and $9; panini sandwiches come with a choice of fresh fruit or chips, and a glass of wine, making this place a notably good deal in its own right.

The six sandwiches cover the basics like chicken- and tuna-salad sandwiches, turkey, salami, ham, a Greek wrap and a grilled three-cheese sandwich. We picked the "Memphis Blues": oven-roasted turkey breast, English white cheddar, red onion and barbecue sauce. The latter was almost a deal breaker for us -- too many times chefs get heavy-handed with the stuff and it overwhelms the dish -- but we needn't have worried. Here, the zippy sauce was applied with just the right touch, perking up the turkey and pairing with the white cheddar cheese like a dream. The sourdough was delicately pressed, just barely crisp.

What we should have worried about was, surprisingly, that innocent-sounding side of fruit: As the plate was presented, the first thing we noticed was a white bar-code sticker on an apple wedge (red delicious, we know for a fact), which had started to oxidize around the edges. The strawberries, soft to the point that we'd have already tossed them from our fridge, had seen better days (like, last week), and though they could have been fine, the red grapes were victims of guilt by association and also sat untouched. And that's a shame, because the trio would have been a great counterpoint to the savory sandwich and a natural to pair with our sunny glass of pinot grigio (pinot noir and a cabernet were other options).

Winehaus could easily stake its place in the crowded lunch field along Watson and beyond -- if it can nail down the little things and keep doing the big things right.