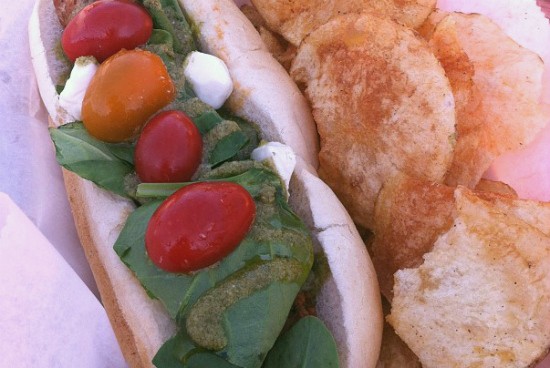 St. Louis PrideFest is the largest event of its kind in the Midwest. It draws more than 80,000 revelers each year and in 2011 was named "Best Festival" by the RFT. This year's festival is slated to kick-off on Saturday, June 23, at noon in Tower Grove Park (4256 Magnolia Avenue; 314-771-2679). The parade begins at noon on Sunday, June 24, at Grand and Utah Avenues and will travel north on South Grand, ending at the entrance to the main gate of the park. A melange of live music, dancing, giveaways and artisan vendors make for a fun-filled festival, but the food and drink selection at Pride is also a huge draw - and this year's offerings are the most impressive yet.

Festival-goers can expect the usual sustenance-providing suspects as well as a range of new food trucks. Terry Cameron, co-owner of Cameron Catering with husband Chuck, has been slinging food at PrideFest for nine years and looks forward to returning.

"If you really want an uplifting experience, go to Pride," says Cameron. Last year I was secretary and rode on a golf cart at the front of the parade with my 80-year-old mother. It was so much fun; such an honor."

Another PrideFest mainstay are the steak skewers served at the Sweet Meat Stix booth. Owner Steve Hart says he enjoys traveling from his home in Saint Ann, Missouri for Pride each year. The most notable new food trend at this year's festival, though, is a reflection of a citywide dining trend: food trucks: Hot Aztec, Lulu's Local Eatery, Sausage Syndicate and Zia's Italian Food Truck will all be in attendance at Pride.

Hot Aztec (@hotaztec; 314-540-2949) owner Rob Gardaphe says his Mexican street food offerings will include a minimum of three tacos, including but not limited to, the "Diablo Shrimp;" the "Cochinita Pibil," shoulder of pork wrapped in banana leaves and slow-roasted in Achiote and fresh orange juice, served with pickled red onions; a vegetarian option and possibly a mahi mahi taco, as well as the truck's original and Hot Aztec specialty Oaxacan-style hot dogs.

"We're kind of the ideal scenario for an event planner because we pull up, start serving and then we get the hell out," says Loomis. "Pride brings together so many types of people and we've participated in Pride personally in the past but never on a business level. I'm sure the energy is going to be great, the weather is supposed to be really nice and it should be a lot of fun."

At Sausage Syndicate (@syndicateSTL; 314-649-8778), owners Christy Perry and Paula Priest) are excited to participate in Pride in a new way this year after launching their food truck last fall.

"We are a lesbian-owned food truck," says Perry. "Lesbians selling sausage - what's not to love about that! It's important to us to give back to the community. They've given us a lot of support personally and as a business, and we want to give back."

The dining scene at Pride is impressive in its variety and also includes food vendors Garden Gate Tea Room, Jamaican Jerk Hut, Missouri Kettle Corn (look for its rainbow kettle corn in honor of Pride!), Mediterranean fare and more. Sponsor Barefoot Wine and Bubbly is hosting the Barefoot Wine Garden in the Grove, where red sangria, white sangria, moscato, pinot grigio, mimosas and bloody marys will flow freely, and Absolutli Goosed Martini Bar (3196 South Grand; 314-771-9300) is throwing a pre-party before the parade at 10 a.m. on Sunday.