Welcome to Girl Walks Into a Bar, a weekly Gut Check feature that spotlights local bars and bartenders. This week, Rease Kirchner profiles Horizon Boutique Nightclub's Bradon Parsons. Below is a Q&A with Parson's followed by his recipe for the "Let's Get Looped" martini.

Horizon Boutique Nightclub (2144 Market Street; 314-421-6969) is the newly renovated nightclub attached to Harry's downtown. The bar scene at Harry's has been a roller coaster of changes throughout the years, but the Horizon looks to be a much classier venue in the nightclub scene. Gut Check met up with the bar manager, Bradon Parsons, to get the lowdown on what to expect from the bar at this new chic hot spot.

Parsons started working the bar scene more than twenty years ago; he's been with Harry's through the good and the bad. He noted that a combination of external factors, including the highway 64/40 construction, economic struggles and poor decisions led to Harry's falling off the grid for a while in the past.

But the revamped Horizon has gotten back into the game with quite a splash. The new boutique nightclub is decked out with suede booths and chandeliers; fireplaces light up the bar. Plus, the drink menu is as classy as the decor.

Parsons has worked diligently on inventing exciting new cocktails and working with his staff to keep customers happy. "I can't stand a watered-down drink," says Parsons. "I want people to enjoy their drink and have a good time." 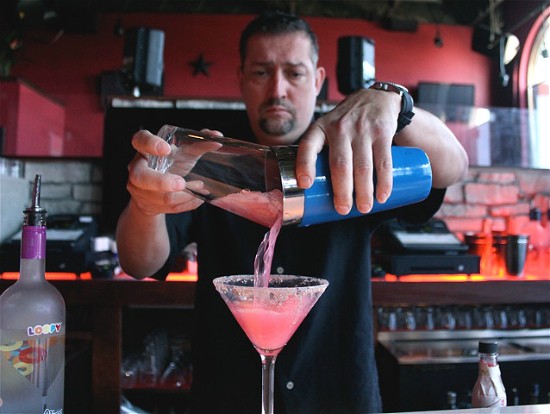 A girl walks into a bar and orders a ________. She has just earned your undying admiration. Our "Pamaberry Cooler" -- blueberry-infused vodka [made in-house], pomegranate liquor, Pearl pomegranate vodka, fresh-squeezed lemonade and splash of cranberry.

Other than your own place, where do you go to get a good drink, and what do you get? The Famous Bar or West End Grill and Pub -- drink depends on my mood.

What's one thing most people don't realize about crafting cocktails? It's an art. You don't just throw a bunch a junk together. The best part is you get to try it out yourself first!

Who would you most like to have a drink with? Rush Limbaugh.

What is the most bizarre/stupidest/dumbass drink anyone has ordered from you? "The Blue Thing." The guy couldn't even describe it; he just kept saying he wanted "The Blue Thing" and that some girl had made it for him before.

What's the coolest/weirdest thing you've witnessed while working? This guy who was walking around with his pants halfway down but with his hands covering his butt cheeks -- not sure if he realized it or not. He wanted to shake my hand afterwards -- I didn't!