Chicken McNugget Happy Meal at McDonald's and That's My Boy 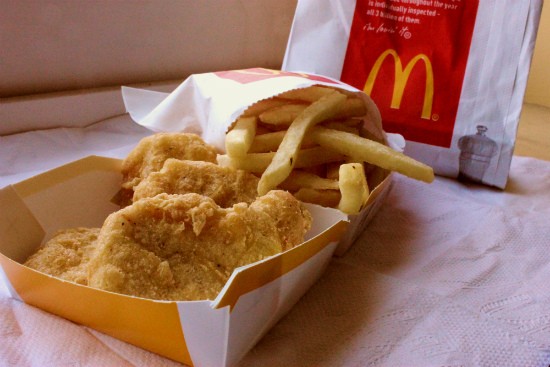 Adam Sandler's newest film about being a shitty dad hits theaters today, right in time for Father's Day -- for people who would like to treat Dad to a fate worse than patricide, Gut Check can only assume. No, it's not Big Daddy or Grown Ups or Click, though it will make you long for films of such caliber. It's called That's My Boy and finds Sandler playing Donny Berger, father of Han Solo Berger (played by Andy Samberg), the product of statutory rape. It's a comedy, in case that description was at all unclear. It's a comedy about how middle-school-age Donny was raped by his middle-school math teacher, who conceives a child because unprotected sex is the only way to rape a kid, obviously. And somehow that plot line isn't the film's most disturbing one.

Know what? The experience of eating a McNugget Happy Meal is eerily similar to the experience of watching That's My Boy. With both you go in knowing what to expect; both were way better when we were kids but even now don't always disappoint; both contain zero nutritive value and can best be described as guilty pleasures. Face it: All of us are vulnerable to cravings for vacuous, cheap food and/or laughs, which explains why McDonald's and Adam Sandler rake in so much dough.

And so it was that after attending an advance screening of That's My Boy at the AMC Esquire 7 (6706 Clayton Road, Richmond Heights; 314-781-3806), we ventured to the McDonald's (8127 Olive Boulevard, 314-994-1435) in University City for a four-piece McNugget reunion. Perhaps it's because Gut Check is an adult (in appearance, at least), but for some reason our kiddie meal didn't come packaged in the signature Happy Meal box with golden-arch handles.

Akin to realizing that the central plot of That's My Boy is based on a statutory rape, that was the first bummer.

Bummer number two arrived as we opened the sack into which our repast had been so cavalierly tossed: no fucking toy!

That the food itself was cold and limp and mostly flavorless raised hardly a blip on our Disappoint-O-Meter, which isn't to say that McDonald's food is always those things. Gut Check can wolf down an order of McDonald's fries with great relish, but this dining experience left us feeling stone cold.

So, come to think of it, did watching That's My Boy.