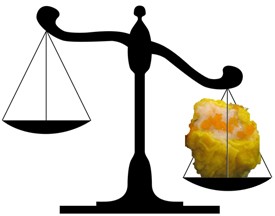 As far back as Gut Check can remember [insert your own Proustian madeleine reverie here], we've been smitten with the Chinese chow-down concept of dim sum. Sitting around a table with eight or ten people, pointing at exotic-looking items on the carts that the servers push around, asking, "What's that?" not understanding the answer and then eating it anyway -- yep, that's our idea of a perfect Sunday afternoon.

So we were a little on edge when our e-mailbox clanged with the arrival of a dispatch from FoodSafety.gov, announcing a massive-sounding recall of pork dumpings.

Is 55,757 pounds of pork dumplings massive-sounding enough for you?

In a press release issued earlier today, the U.S. Department of Agriculture's Food Safety and Inspection Service (FSIS) writes that the dumplings were recalled by CB Foods, Inc., in El Monte, California, because they contain monosodium glutamate (MSG), which is not declared on the label.

Armed with our trusty Casio FX-260 Solar calculator and a recipe for shu mai, we set to calculatin'.

Figure a dim sum joint puts maybe 4 of those babies in those li'l 6"-size steamer baskets they cart around, that's ... 223,028 steamer baskets. At, say, 3" high, stacked one atop another, that's...a 55,757-foot tower of li'l steamer baskets! (Sometimes things are so symmetrical!)

This one caught our eye because it was dumplings [briefly recall your own Proustian snippet here]. We're not sure what to think of MSG; we know people who are sensitive to the stuff, so we totally understand why a recall is necessary. We ended up reading the whole FSIS press release. You know what was even more disturbing than the undeclared MSG? We were imagining a dumpling chef in a big white apron sprinkling MSG over tens of thousands of pounds of ground pork, but that's not what happened. What happened was this:

Equally troubling: According to the FSIS, the recalled dumplings, which were shipped to hotels and restaurants in California and Nevada, were manufactured from June 2011 to June 5, 2012.