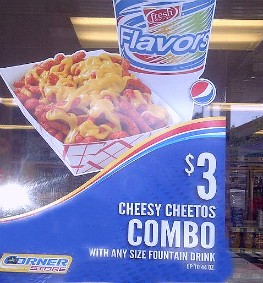 Last week Gut Check was so enamored with the news that Subway was test marketing Doritos nachos at select locations inside Wal-Mart stores nationwide that we recreated the dish for taste test purposes. The next day a tipster informed us that several Subway restaurants housed in St. Louis Wal-Mart stores were serving the dish. We wasted no time; immediately venturing to the Wal-Mart in Collinsville, Illinois to order this junk food mash-up surprise. For what it's worth, we were happy to report that Subway's Doritos nachos were tastier than Gut Check's version.

Another Gut Check operative forwarded us this news after seeing it on Twitter. (Linked from Instagram, of course, with a photo. Thanks, Internet.) Based on the promotional photo we're assuming the ingredients to make Cheetos nachos the "Cheesy Cheetos Combo" involve simply Cheetos (BUT WHAT FLAVOR?) and nacho cheese.

Unfortunately the photo shares precious else about the product or the convenience store selling it. We're thinking another DIY taste test might be in order, which seems the economical choice compared to driving 19 hours to El Paso. Meanwhile, if you've seen this product or a similar one sold in St. Louis tell us about it in the comments.