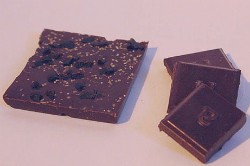 Springfield-based Askinosie Chocolate was recently awarded its fifth silver Sofi Award in the category of "Outstanding Chocolate" by the National Association of Specialty Food Trade (NASFT) for its new dark milk chocolate and black licorice bar. It's also a finalist for the organization's gold award for the same product. Gold winners are to be announced at the Summer Fancy Food Show on June 18 in Washington, D.C. If Askinosie takes home the gold this year it will be the company's sixth NASFT award in four years, not to mention winning "Best Chocolate" in RFT's 2011 Best of St. Louis issue -- not too shabby for a confectionery that was founded in 2005 by former trial-lawyer-turned-chocolate-creator Shawn Askinosie. On the heels of his trip to Washington to go for the gold, feature products at the trade show and guest lecture about small business incorporating social responsibility into its missions, Askinosie took a break to talk choc with Gut Check.

Gut Check: The dark milk chocolate and black licorice bar is one of Askinosie's newer products. Tell us a bit about it and the CollaBARation line it's a part of.

Shawn Askinosie: It came out in October [2011], and it was the first one in our CollaBARation line. This particular bar was the one that launched the line. It's made with licorice from a friend of ours [who lives] in Sweden, who is our distributor in Sweden for our chocolate. He happens to also have a licorice factory and so we picked him to work with first on this line because we knew him, and the Swedes put licorice in everything -- they eat it morning, noon and night. I've been there and I can testify to that. We thought it would be fun to combine our dark milk with his licorice, and a lot of people wouldn't normally think of that combination, but it's really taken on a life of its own. It's hard for us to keep that product in stock.

GC: Where did the inspiration for the CollaBARation line come from?

SA: All of these bars are important to us because of what they represent to us as a company, and that is collaboration. Each bar is different, but what they do is, they allow us to work with our friends to come up with a chocolate bar. We'll probably have two or three more of these to complete our line and then we'll be constantly revisiting the ones that we have and making sure they're the best. It's a lot of fun and it's become a big seller for us.

GC: What other bars are featured in the line?

SA: We love working with other people, and working with our friend in Sweden who makes licorice started it [the CollaBARation line] and then we went from there to our malted milk bar, which collaborated with Jeni's Splendid Ice Creams in Columbus, Ohio. Then with our coffee bar we collaborated with Intelligentsia Coffee in Chicago, Illinois -- probably the premium coffee roaster in the country, if not the world -- they've been friends and customers for a long time. Then we just released our El Rustico CollaBARation bar, which is kind of a re-release of a product that we made for Zingerman's Deli in Ann Arbor, Michigan.

GC: We have found that black licorice is a divisive candy -- you either love it or hate it. We're kind of ambivalent toward black licorice but really enjoyed the chocolate.

SA: My wife hates licorice, and it's now her favorite bar that we make.

GC: It's amazing that you not only distribute and collaborate regionally and nationally, but internationally, too.

SA: Our distributor in Sweden buys, and has for many years, more chocolate from us to distribute in Scandinavia, than any single customer in the United States. We sell a lot of chocolate in Sweden, Denmark, Norway. It was our first export experience and we've really kind of refined what and how we export from that experience. You're right, it's a chance for us to do something with our friends in different parts of the country and do it together, recognize them with the bar. We have fun with the word "collaborate" by adding the word "bar" in there...we have fun with it.

GC: Later this month you and the Askinosie team are traveling to Washington, D.C., for the Summer Fancy Food Show where the gold winners will be announced for the Sofi Awards. You've swept the silver award for the past four years...time for a gold award?

SA: The announcement of the gold winners will take place the evening of June 18. I think there are four of us who are finalists. This is our fourth year to be waiting for gold! We've won four silvers in the "Outstanding Chocolate" category, and we also won a silver for our chocolate hazelnut spread last year. It'll be six silver awards including this one.

SA: It is exciting. It's good because it gives us all a chance...it's kind of the one big trade show of year for specialty food, so there are people from all over the world, buyers from all over the United States and then vendors like us and other companies. Countries have booths at this show -- the trade show is huge. France has a booth that's like the size of my factory, and we have a booth that's ten by ten. It's something we look forward to every year. We get to see our customers, and that's great.

GC: Anything you're looking forward to in particular at this year's event?

SA: This year, it's kind of cool, I was asked to speak at the event. They have an educational component to the trade show, and so that's kind of nice. I'll be speaking on the issue of small business incorporating social responsibility into their mission. I'll talk about the social aspects of our business and what we do to help feed children in the Philippines, in Tanzania and here at home in Springfield, and how we do that with a very small footprint and a small number of employees. Hopefully we can teach other small businesses who will be attending this trade show who might be interested how they can apply some of the principles we've used to make an impact on their business.

SA: If you would have asked me six years ago when I was practicing law that we'd be honored in this way I would have never guessed it in a million years that this kind of recognition would come our way. It's quite humbling.

GC: Obviously it says a lot about the kind of business that you run and the quality of the products you make.

SA: There's a compotent to our business that really is about giving back and social responsibility both in our community and around the world. The thing that's at the forefront of our minds is that if we don't make chocolate that people like, that tastes good, that is award-winning, then we would never be able to do those things that we do and we remember that. If the chocolate tastes like cardboard then we can't do those things we want to do to make an impact.

kind business model and positivity that mirrors the purity of the product. Taste what all the fuss is about by picking up Askinosie products at the Wine & Cheese Place (7435 Forsyth Boulevard; 314-727-8788) in Clayton, all area Straub's Markets locations and the Smoke House Market in Chesterfield.