Vote for St. Louis' Most Overrated Burger: Round One 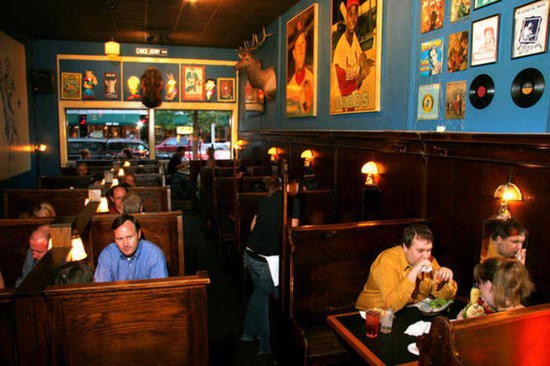 We asked you to nominate the most overrated burgers in St. Louis, and you responded. While your nominations might not have contained many surprises -- then again, an overrated burger can't be a surprise, can it? -- your reasons were highly entertaining.

Page through to see the six semifinalists for St. Louis' most overrated burger.

- Unlike our poll for St. Louis' most underrated burger, this one contains a national chain. I'd hoped to keep this poll strictly St. Louis, but the number of nominations that this chain received couldn't be ignored.

- The poll does include a write-in option, so if your not-favorite missed the cut, feel free to vote for it now.

Chub-z-ub-z: Blueberry Hill's burger gets my vote for the most OVERRATED burger in St. Louis. I really believe that it only makes it in the ''best of" every year, because all of Joe Edward's employees are required to stuff the ballot box full of nominations for it. I defy anyone to place BB Hill's burger next to O'Connell's and Seamus McDaniel's burgers, do a taste test, and HONESTLY try to tell me that it's as good or better than those.

Mark Farace: Five Guys. Did they take the Burger Chef model and re-do it to fail again, or are they just figuring if the population of the area all buys just one burger each, they can call it a day. Give me a bowling alley burger (2 at the same price) before I go here again.

Sally: O'Connells - because the place is swell, people think the burgers are too. They are VERY ORDINARY!

Adammgillespie: I love the royale but their signature burger bores me and is overrated.

Eric: Seamus McDaniel's, definitely. Not too far removed from any other bar burger, and usually over salted.

Page through to vote!

Voting will remain open through the end of Sunday, June 17.