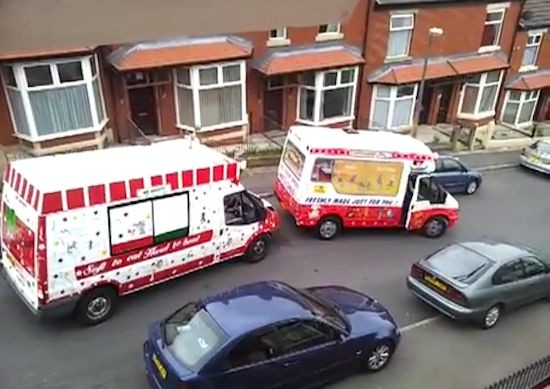 The food trucks in St. Louis have had their share of issues with municipal regulations and bricks-and-mortar restaurants, but the trucks themselves all to seem to get along with one another splendidly.

Which is a shame, really, because the battle between two ice cream trucks in Great Britain shows that the entertainment value of such conflicts is quite high.

We take you (via Gawker) to Blackburn, where two ice cream trucks happened to be tussling over the same turf. Here is an eyewitness account, as reported by the Lancashire Telegraph:

Fellow neighbour John Tighe, 55, said: "It all came down to a turf war.

"One was offering four, two scoop cones with a flake for £2 and the other said he would do them all for 10p cheaper.

"I couldn't believe it when Mr Yummy jumped out of his van and smashed Mr Whippy's window, you just don't expect that around here."