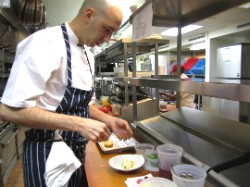 In February, Gut Check reported that chef John Griffiths, the former executive chef of Truffles (9202 Clayton Road, Ladue; 314-567-9100) in Ladue, was slated to cook a dinner at the James Beard House in New York City in June. Yesterday Griffiths contacted Gut Check to tip us off to two preview dinners happening locally that will feature his James Beard menu.

On June 10 Griffiths will host a preview dinner at Modesto Tapas Bar and Restaurant (5257 Shaw Avenue; 314-772-8272) and on June 17 at Sidney Street Cafe (2000 Sidney Street; 314-771-5777). Both preview dinners begin with hors d'oeuvres served at 6 p.m. and dinner at 7 p.m., with each event limited to 60 guests. Tickets for each dinner are $89 per person -- not including tax and gratuity -- and part of the proceeds from each dinner will support Griffiths and his crew for the event in New York City. Reservations for a spot at either St. Louis preview dinner must be made through Modesto.

"Since I am a chef without a restaurant right now, I am organizing two preview dinners to give me a chance to serve the menu to the St. Louis public," says Griffiths. "This will help us to fine-tune the flavors of the various dishes, as well as the wine pairings for each course. And also it is a chance to give the St Louis public a chance to taste such a unique menu without having to travel to NYC to do so."

The official menu Griffiths will serve at both preview dinners and at the James Beard House is after the jump.

This Just In Wine