When Gut Check learned yesterday that Subway is test-marketing nachos made with Doritos, we couldn't wait to try them -- in fact, we were so excited that we bought chips, Cheez Whiz and jalapeños to make some for ourselves.

Turns out we didn't have to wait.

In fact, at the Subway inside the Collinsville, Illinois, Wal-Mart-- we stupidly didn't think to call a closer Wal-Mart-based Subway until after we'd returned to Gut Check International Headquarters -- employees were wearing T-shirts advertising the new "Subway Nachos."

The nachos cost $1.50 (plus tax). The employee empties a single-serving bag of Nacho Cheese Doritos into the container pictured above, adds a few jalapeño slices and then squeezes cheese (or "cheese") sauce from a squirt bottle. She then closes the box and puts it in the same oven used for toasting sandwiches for about twenty seconds. 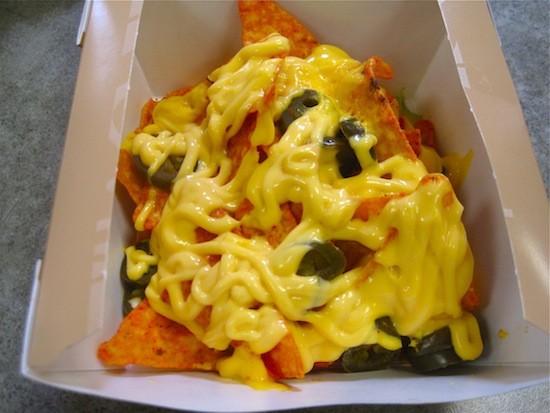 How did they compare to our own creation? Well, the brief spell in the oven punched up the chip's flavor, and Subway's cheese ("cheese") sauce was smoother and tangier, so in a head-to-head matchup of nachos made with Nacho Cheese Doritos, we have to give the edge to Subway.

We'll still take our Cool Ranch Doritos nachos over them both, though.

This Just In What Hath God Wrought